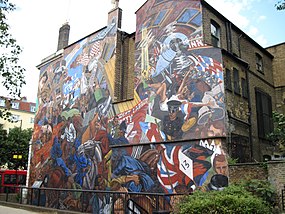 On Sunday 4 October 1936 a mass mobilisation prevented a planned march by Oswald Mosley’s British Union of Fascists (BUF). Despite a huge police presence the BUF were unable to hold their provocative march through a largely Jewish area in London’s East End. The BUF had a history of violence. Protestors at a meeting in Olympia in June 1934 were subjected to brutal beatings. Street attacks on communists and Jewish people took place regularly.

Initially some left wing groups were reluctant to physically counter the BUF in 1936. The Communist Party, for example, wanted to assemble a counter demonstration on the Embankment. But, under growing pressure from their own members and other working class organisations, they made a last minute alteration and joined hundreds of other anti-fascists in Cable Street. The slogan of the counter demonstration was ‘No Pasaran’ – They Shall Not Pass, a slogan already in use in Spain by Republicans. The fascists were opposed on the day by thousands of local people alongside anti-fascists. Street barricades were erected, stones were hurled, and children rolled marbles under police horses’ hooves to stop them attacking the counter demonstrators. The BUF were forced to abandon their planned route.