Here are stories of some of the people, places and events involved in Lancaster and Morecambe’s lesbian, gay, bisexual and transgender (LGBT) history. Many of these stories have national significance with regard to the movement towards equality for LGBT people in Britain. They are also an important reminder that many of the rights that have been so hard-won by the LGBT community in this country are still being denied to others around the world today. >> READ MORE

Music to my Gay Lips in the Farmers Arms

A Love Story for Lancaster

Anthony Peppiatt talks about how he was politicised through his involvement with Lancaster Gay Liberation Front (GLF) and radical gay politics, which began whil...

Zephyrine Barbarachild discusses, how LGBT activism in Lancaster and Morecambe has been firmly linked to the LGBT social scene since the early days. LGBT social...

Lynne Braithwaite was born Lawrence Braithwaite in the Lake District in 1934. After serving 40 years in the RAF, she retired as a flight sergeant in 1989 and sh...

While the UK has introduced legislation in recent years that protects the rights of lesbian, gay, bisexual and trans (LGBT) people, in other parts of the world ...

Humphry Berkeley was Conservative MP for Lancaster between 1959-65, a period when male homosexual activity was still illegal in Britain and many men were being ...

In 1806, five men were tried and executed for ‘sodomy’ at Lancaster Castle, following a raid on the house of Isaac Hitchen in Warrington. Eleanor Levin has ...

Flyer for the first national CHE Conference, held in Morecambe in 1973

Lancaster’s lesbian, gay, bisexual and transgender (LGBT) history plays an important part in the national story around the fight for equal rights by the LGBT community. In 1806 at Lancaster Castle five men were tried and sentenced to death for homosexual activity, the largest state execution of gay men in British history

While male homosexuality ceased to be a capital offence in Britain in 1861, men could still be arrested and given lengthy prison sentences until the 1960s. Humphry Berkeley, MP for Lancaster from 1959-65, was one of those who tried to change the law that criminalised homosexuality. Although Berkeley’s bill was dropped, male homosexuality was finally decriminalised in England and Wales not long afterwards, in 1967.

The period following the change in the law saw a wave of gay activism across the UK and both Lancaster and Morecambe played their parts in this. From the early 1970s, there were branches of the Gay Liberation Front (GLF) and Campaign for Homosexual Equality (CHE) in Lancaster. There was also a very active Gay Soc at the then new university, whose members regularly contributed to the student newspaper, Scan, and later the Lancaster Gay Group, based in town. Many gay activists spanned the world of the town and campus and were involved in several groups and different rights campaigns, including the women’s movement.

Although Berkeley’s bill was dropped, male homosexuality was finally decriminalised in England and Wales not long afterwards, in 1967. 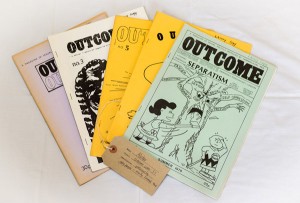 The Gay Liberation Front kick-started the gay activist movement in Lancaster in the very early 1970s, when a local group was set up involving many university students. The GLF took a very radical and separatist approach to gay politics, which initially set it apart from the CHE group that came along later. Anthony Peppiatt talks about how the group was set up and how the group started and how those involved were driven by ideals that also drew on feminist and radical left-wing politics in seeking to fundamentally overturn the value-systems of the day.

The Campaign for Homosexual Equality was founded in 1964 as the North Western Committee for Homosexual Law Reform and held its first national conference in Morecambe in 1973. This was not without local controversy. CHE records and correspondence in the local newspapers indicate that Morecambe town council initially attempted to block the conference booking and, while the conference did eventually go ahead, attendees were met with anti-gay protestors who demonstrated everyday outside the conference venue. Bill Fuge talks about his memories of attending the conference, as well as his role as a founder member of the Lancaster and Morecambe branch of the CHE, which held regular meetings and social events, produced a newsletter and was active in campaigning for gay rights both locally and nationally.

Those who were engaged in activism during this period speak of a very particular sense of energy and momentum. A lot was happening and it was a very exciting time for those involved. One good example is the protest held outside the Lancaster branch of British Home Stores in 1976 in response to the forced resignation of a gay BHS employee in Worthing, as reported on the front page of the national Gay News. Bill Fuge recollects that people in Lancaster were “slightly amazed” to be presented with protest leaflets as they went in and out of the store and the event “shook Lancaster at the time.” Some of the people involved in the GLF and Lancaster Gay Group produced a magazine called Outcome from 1976-9, which achieved wide circulation among the lesbian and gay community in Lancaster. One of those who helped to produce Outcome talks about this and his involvement in other local gay groups, highlighting how Lancaster was a focal point for gay activism for the entire region

Although progress on LGBT rights since those early days has been significant, there remain challenges.

Lancaster and Morecambe CHE launched the Lancaster Gay Switchboard in 1976, the first such helpline in the whole of the Northwest. Peter, who has written elsewhere about the history of the Switchboard talks about his own involvement as a volunteer. Alistair also talks about the kinds of calls the Switchboard received in the early 1980s when he was involved. For Alistair, volunteering for the Switchboard was a form of activism and, even if it was not conceived as such by all volunteers, Switchboard members were often compelled to defend their work in the face of prejudice and ignorance, both locally and nationally. Issues of the Lancaster Gay Groups’ Newsletter from the early 1980s indicate that there was resistance from some local organisations and newspapers to advertising the Switchboard. There was also a famous case in 1979 when the Switchboard, supported by the CHE, took a complaint to the Press Council concerning a piece written by John Junor in the Sunday Express in which he suggested an advert for the Lancaster Gay Switchboard promoted ‘discrimination in favour of queers’. Junor’s article galvanised a strong response from various gay groups in Lancaster and the Press Council upheld the complaint.

In many ways Lancaster in the 1970s was a good place to be lesbian or gay, as Sheelagh Houlihan describes in her poem, ‘Coming Out’. The LGBT activist scene also overlapped considerably with the burgeoning LGBT social scene. This remains so, though the world of LGBT social life and activism in Lancaster is always changing, as Lizzy Hare’s piece, ‘A Lesbian History of Lancaster in Six Nights Out’ illustrates. The CHE and GLF groups fizzled out in Lancaster by the early 1980s as the social and cultural landscape changed.

Although progress on LGBT rights since those early days has been significant, there remain challenges. For instance, equality legislation affecting transgender people has only recently been introduced. Lynne Braithwaite was one local person who did much to promote awareness of transgender issues across Lancashire among the police and other services. She initiated this role in the 1990s at a time when there was far less public awareness and understanding.

On a global level, members of the LGBT community in other countries still face discrimination in law. There is a long way to go towards achieving equal rights for LGBT people around the world.

Various groups and projects in the local area provide support to the LGBT community. The Isaac Hitchen Project is working to increase the social inclusion of LGBT people in Lancashire. Robert Mee, CEO of Out in the Bay, says:

“The group was founded in July 2008 and was known then as Lancaster and Morecambe LGBT Group. We asked the group to come up with a name for itself and we became LGB&T Out in the Bay. In 2009 we became a small constituted group. Our agency grew to have a Facebook page and twitter. We started support groups and coffee afternoons in early 2010, which we ran in Lancaster and Morecambe from the libraries and various venues across the Lancaster District.

In late 2013 we attained charity status after becoming a CIO (charitable incorporated organisation). Robert Mee is currently the CEO. We have a board of directors and a small staff team. We have had Awards for All funding twice and are currently in the process of filling out a Reaching Communities bid.”