Lynne Braithwaite was born Lawrence Braithwaite in the Lake District in 1934. After serving 40 years in the RAF, she retired as a flight sergeant in 1989 and shortly thereafter transitioned to female. From that point until her death in 2008, Lynne was actively involved in training and awareness-raising about transgender issues within the Lancashire Constabulary and other local services, a process she instigated when she saw there was a vital need for it. 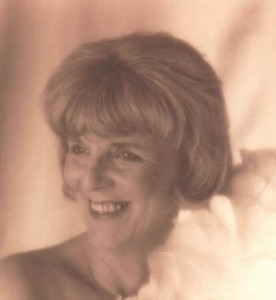 Lynne Braithwaite: a woman who was “larger than life”

Lynne Braithwaite was someone who very clearly stood out from the crowd. Tall and “quite stunning” in appearance, she could also be very outspoken: “she was no wallflower, and she didn’t suffer fools gladly at all. And if anybody put a foot wrong in how they addressed her, she would soon tell them.” Lynne was a woman of huge energy and drive; when she made a contribution, she did so “big time.” She was someone who was certainly “larger than life” and she made a powerful impact on those around her: “Lynne enjoyed a good time, she put a lot of effort into everything she did and she made friends very easily. People found her to be intelligent, amusing, sometimes a little bit near the knuckle… She was a really inspirational person to be around.”

Lynne’s packed funeral reflected the number of people she had inspired. The event was  marked by a flypast by the Vulcan Bomber, honouring her significant contribution as an engineer on the ‘Vulcan to the Sky’ project. She also received a posthumous commendation from the police service in recognition of the work she had done in the area of transgender training. The sphere of Lynne’s influence was wide: “everybody respected her and thought a huge amount about her… I don’t think there was anyone there who hadn’t learned a lot from Lynne.”

Lynne transitioned at a time when there were still a lot of challenges facing the transgender community.

Lynne transitioned at a time when there were still a lot of challenges facing the transgender community. It was particularly difficult because she was in the armed forces. She was worried about losing her job and her pension, as the employment prospects for trans women at that time were not good and there was less understanding of trans issues. She therefore made sure that no one in the RAF knew of her intention to transition until she retired.

Despite the challenges, Lynne was always very open with people about her transition. For example, she was called out of retirement to work on the Vulcan after she had transitioned but she readily explained her situation to her colleagues and quickly put everyone at ease. She wasn’t ashamed to share funny stories about her transition that others might have found embarrassing, including a highly comic account of the day her wig blew off as she was leaving the Vulcan hangar and how she chased after it across the airfield! Lynne was forthright, however, with people who didn’t react well to her. The telephone can be a particularly tricky area for a trans woman to deal with because there are no visual clues about the speaker, just the voice. Lynne was quite prepared to put people straight and, if necessary, “slam them down, whoever they were!”

The experience of transitioning from male to female also raises interesting issues about different social attitudes towards men and women and what happens when you encounter sexism, having lived previously as a man. For example, Lynne would encounter mechanics who assumed she knew nothing about cars and talked down to her. She “wouldn’t put up with it. She knew exactly what was wrong with the car and what she expected to be done about it. In that respect she was a good ambassador for women in general.”

Lynne had several experiences with the police which led her to realise that police officers needed training in trans issues. In her diary, she gives an account of a visit from a police sergeant to inspect her gun cabinet in which her change of gender led to a discussion about her mental health. Lynne was clearly furious when the sergeant wanted to revoke her gun certificate but she did concede that it wasn’t the policeman’s fault and he was only doing what he was told to do.

Wherever Lynne went, her training “always went down an absolute storm… She would make them laugh and that’s one of the best things you can do in a training session, especially about an awkward subject for some people.”

The fear of being stopped by the police when driving was also a factor which motivated Lynne to volunteer as a police trainer. Members of the trans community used to be afraid of this eventuality because “pre actual transition, your documents weren’t right, so you were always concerned about what the police would do.”

After her transition, Lynne initiated contact with the police herself, explaining who she was and the fact that she felt cadet police officers needed training so they would know what to do when encountering a member of the trans community. The climate during the mid 1990s was changing and the police were very receptive to Lynne’s idea. Lynne “kicked it all off, got it all going” and from the outset she led on devising and delivering the training, first at police headquarters and later in Lancaster. In this way, Lancashire Constabulary were at the “vanguard”, being one of the first forces in the country to include training on trans issues.

Lynne’s training “mushroomed”, spreading to other forces. She also became involved in writing the first draft of police procedures on what to do if arresting a trans woman. It’s important to remember at this point that when Lynne transitioned there was no legal protection at all for trans people. Lynne went on later to train magistrates and the WRVS, as well as psychiatrists at Ridge Lea Hospital, where it seems she herself had been a patient during her transition. She also requested a meeting with the local bishop, as she felt it important to discuss the church’s response to the trans community.

Wherever Lynne went, her training “always went down an absolute storm… She would make them laugh and that’s one of the best things you can do in a training session, especially about an awkward subject for some people.” While never “parodying herself,” Lynne could “have a laugh at her own expense.” She dealt particularly well with people’s curiosity. She aimed to dispel the myth that being trans is just about having operations and “could be quite graphic if she needed to be.” At the same time, however, she was clear about drawing the boundary of privacy when people asked intrusive questions. Her training had very significant impacts in terms of informing people and combating ignorance and prejudice. It gave people confidence to say “actually that’s not right; what you’re saying is just hearsay and it’s wrong.”

Lynne as a Transgender ‘Activist’

In many ways, Lynne’s actions in the field of trans awareness qualify her as a trans ‘activist’. She was certainly a very active person. Her military background meant she wasn’t intimidated by anything and she would face things “head-on.” She loved her work and her energy was “staggering,” even into her 70s.

She was not somebody who “marched down the street with a big banner in somebody’s face. Lynne’s activism was much more behind the scenes than that, subtle – she just didn’t push it in people’s faces. She asked them if they wanted to know more about trans issues.”

Lynne and other members of the Trans Lancs Advisory Group, along with members of Lancashire Police, 2007 Image reproduced courtesy of Press for Change: www.pfc.org.uk

However, Lynne would probably not have considered herself an activist in a political sense. She was not somebody who “marched down the street with a big banner in somebody’s face. Lynne’s activism was much more behind the scenes than that, subtle – she just didn’t push it in people’s faces. She asked them if they wanted to know more about trans issues.” Her activism was conducted “in her own way in her own place” and that made her very special as “not many people had even thought about doing that.” Sadly, her sudden death came too soon: “she’d still a lot more to do and a lot more to give.” However, she left a powerful legacy in terms of the contribution she made towards public understanding of trans issues in the Northwest and beyond: “the way she did it was… perfect.”