While the UK has introduced legislation in recent years that protects the rights of lesbian, gay, bisexual and trans (LGBT) people, in other parts of the world the law actively discriminates against members of the LGBT community. In her article ‘LGBT Rights: The Global Picture’, Ruth Davies looks in particular at the situation in Uganda and Russia and offers suggestions as to what we can do here in the UK to support LGBT rights internationally.

Ruth has also created a ‘Global LGBT Rights Activity’ that can be used with students, youth or community groups to explore LGBT rights around the world. 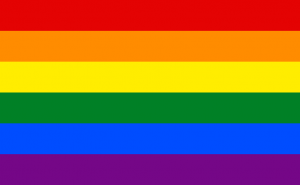 Recent years have seen considerable progress in the struggle against discrimination against LGBT people in the UK. Elsewhere on this website are documented examples of how local people were part of the movements for this progress. In 1988 the UK government passed ‘Section 28’, part of the Local Government Act, which made it an offence for anyone in a school to ‘promote homosexuality as a pretended family relationship’ which effectively prevented teachers and youth workers from supporting gay teenagers or teaching about LGBT rights. Twenty-six years later we have legally recognised gay marriage and a government that says it is committed to advancing LGBT equality. Indeed, we now have legislation that makes it illegal to discriminate against people on the grounds of sexuality and which obliges statutory bodies to seek to remove disadvantage [1].

This is not to say that discrimination is a thing of the past. LGBT teenagers in England have higher rates of mental illness and self-harm than their heterosexual peers and homophobic bullying is common [2]. Yet the movement for equality has given us a language to name these phenomena, and professional bodies see them as a challenge to overcome.

Many international and regional conventions support the rights of LGBT people to live safe from persecution and discrimination.

Such progress should not be remarkable. Many international and regional conventions support the rights of LGBT people to live safe from persecution and discrimination. In 2006 an international conference of human rights lawyers and experts met to decide how existing human rights conventions could be used to protect LGBT people. This resulted in the Yogyakarta Principles, which in 2008 influenced the UN Declaration on Human Rights, Sexual Orientation and Gender Identity, signed by 94 states, declaring that human rights apply equally to all humans regardless of sexual orientation [3]. If we consider the legal situation in individual countries, nearly two thirds of countries in the world have decriminalised same sex behaviour, 52 countries prohibit discrimination on grounds of sexual orientation in employment and 24 have legislation against hate crimes.

At the time of writing (March 2014) two countries are causing particular concern because of human rights violations against LGBT people: Uganda and Russia.

Many African countries have a record of discrimination and persecution against LGBT people.  This can be seen on the maps produced by the International Lesbian, Gay, Bisexual, Trans and Intersex Association (ILGA) [4]. People defending homophobic laws have argued that homosexuality is ‘un-African’ or ‘Western’ but there is evidence that in many traditional African societies there was culturally approved or tolerated sexual variance which was restricted under colonial law [5]. In the era of independence, some leaders have targeted sexual minorities as scapegoats to divert attention from political and economic problems, and they have been helped in this by religiously motivated Western interests.

In Uganda, anti-gay messages in the media have become more and more extreme, with people being ‘outed’ in the press.

In Uganda, anti-gay messages in the media have become more and more extreme, with people being ‘outed’ in the press. In 2011 this led to the murder of activist, David Kato, named as homosexual in a newspaper. This year (2014) an ‘anti-homosexuality’ law was passed with extremely grave consequences for LGBT Ugandans. Simply being homosexual now carries a life sentence and social or educational groups for gay people are illegal. This law was the result of a Private Members’ Bill heavily influenced by American evangelist, Scott Lively, who since 2002 has promoted an anti-homosexual message in Uganda, especially to legislators, educators and police officers. He currently faces prosecution under a US law that allows citizens of other countries to bring a case against a US citizen for human rights abuses [6].

Although homosexuality is not illegal in Russia, the age of consent is the same for gay and straight and homosexuality is not officially considered a mental illness, there is widespread discrimination against and persecution of gay people. Many reasons have been proposed for this, among them: the influence of the Orthodox church; a fear of the population dwindling; antipathy to minorities and alternatives generally; and nationalism (therefore resistance to international pressure). Economic and political instability and corruption may also fuel social conservatism [7].

In response to concerns raised at the time of the Winter Olympics, Putin’s claims that gays have equal rights are belied by the recent law which bans ‘gay propaganda’ in Russia. 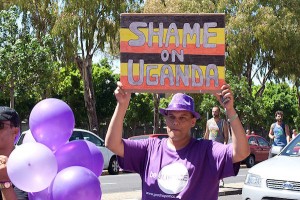 In response to concerns raised at the time of the Winter Olympics, Putin’s claims that gays have equal rights are belied by the recent law which bans ‘gay propaganda’ in Russia. Under the cloak of promoting ‘traditional family values’, this law was ostensibly designed to ‘protect children’, as if homosexuality was equivalent to drug abuse. In effect, since children may be present in any public space, the law prevents anyone from mentioning gay issues in public or advertising an event or venue catering for gay people. So, in January 2014 when the Olympic torch passed through Vorenzh, a gay activist was arrested simply for waving a rainbow banner. Even reporting attacks on gay people has been held to be against this law [8]. Since this law was passed, activists report an increase in hate crimes against gay people and opinion polls have shown an increase in negative attitudes from the general public. This has extended to violence, including attacks on both individuals and on groups of people demonstrating. These are often not prosecuted by the police.

How can we support LGBT rights internationally?

By listening to the voices of activist groups in countries such as Uganda and Russia who know  best what will be useful. At key times, such as when an oppressive law is about to be passed or when someone is facing prosecution or punishment, it might be appropriate to protest directly to foreign governments or to demand that our own representatives do the same. In our own country we can show solidarity by demonstrating outside a country’s embassy.

We should also remember that when someone faces persecution because of their sexuality they have the right to claim asylum, so we should welcome LGBT asylum seekers into our communities and insist that they are treated with fairness and dignity by our own officials.

We should also remember that when someone faces persecution because of their sexuality they have the right to claim asylum, so we should welcome LGBT asylum seekers into our communities and insist that they are treated with fairness and dignity by our own officials.