Zephyrine Barbarachild discusses how LGBT activism in Lancaster and Morecambe has been firmly linked to the LGBT social scene since the early days. LGBT social spaces can be places to meet others, have fun and explore or assert one’s sense of identity – but they can also be places to network, and to raise awareness and funds for social action. 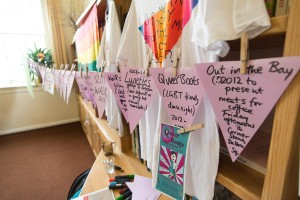 “LGBT social events are of themselves a form of activism”

Since the early 1970s much gay activism, and many social events, have been dreamed up and planned over a pint or three in the many pubs and clubs which have been part of Lancaster’s shifting ‘gay scene’. A gay man fondly remembers Lancaster in the early 1980s, highlighting the link between social gatherings and social activism:

“I arrived in Lancaster in 1980. It was quite a revelation. I had an immediate love of the city and the people. Although I was ‘out’ when I arrived, it had not been long. My first gay pub I went to in Lancaster was the Ring o’ Bells… Through meeting people there I joined a gay group, CHE [Campaign for Homosexual Equality], worked on Gay Switchboard and went to the gay nights at the Labour club.

There were occasional jaunts to Morecambe where I met the first great love of my life… who introduced me to an eclectic mix of [great characters] in the Ship Hotel…. Morecambe was a lot less political and much more fun… I look on those years in Lancaster and Morecambe fondly. I have never felt so part of the gay scene as I did there.”

LGBT activism required funds – for leaflets, and travel expenses to rallies and demonstrations – so someone would suggest holding a benefit or a disco to raise money. Conversations with gay activists confirm that social events often doubled as fundraisers, which enabled political activism to move forward. The social organisers were also in many cases out on the streets demonstrating. Gay Pride events most visibly combine activism and the social scene: “We’re gay! We’re proud! What are you going to do about it? Come and join the party!”

“LGBT social events are of themselves a form of activism.” 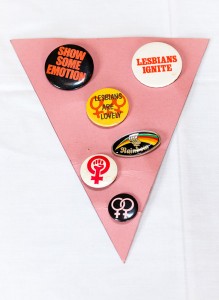 Badges brought to the Lancaster and Morecambe LGBT Histories Day, May 2014

As an enthusiastic radical lesbian feminist activist, for a decade from the mid-90s my involvement in organising women’s social events epitomised the intersection of the two interwoven strands of gay activism and social life. I was unaware of this: I just thought I was having a good time…

In May 2014, Global Link held a local LGBT Histories event where participants brought LGBT magazines and newsletters, t-shirts and badges, which were photographed; others contributed memories and recorded short A map and a timeline of Lancaster and Morecambe LGBT activism and social life were gradually developed, drawing on these much-valued personal contributions. While Morecambe apparently had a thriving if inevitably more underground gay scene back in the 1950s, Lancaster University and St. Martin’s College (now University of Cumbria) were seen to have helped promote a stronger – and more radical – LGBT social scene in Lancaster than Morecambe from the 1970s onwards. People came to Lancaster’s gay discos from all over the Northwest and events such as these were seen as particularly important for those from more rural parts of Cumbria who didn’t have other, more local opportunities to get together.

Lizzy Hare’s ‘A Brief History of Lesbian Lancaster in Six Nights Out’ is a whistle-stop tour of some of Lancaster’s gay social meeting places over the years, including the Ring o’ Bells, Kizzy’s Bar, the Yorkshire House and the Farmers Arms.

These and other gay or gay-friendly venues were among the reminiscences of those who attended the LGBT Histories event; many people spoke of the vibrant LGBT social scene in Lancaster and its importance to the LGBT community. Liz, for example, explained that venues like Reds were places for members of the LGBT community to “explore and to feel safe and to think… that it was OK to be gay”, while also having “a lot of fun!”

I look on those years in Lancaster and Morecambe fondly. I have never felt so part of the gay scene as I did there. 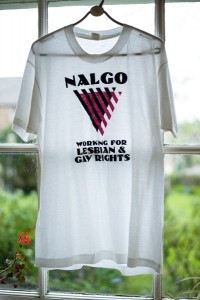 T-shirt brought to the Lancaster and Morecambe LGBT Histories Day, May 2014

However, as Sheelagh Houlihan describes in this account of a fight at the Farmers Arms in 1975, homophobia could be encountered even in such gay-friendly venues, particularly in the early days.

Lancaster’s active LGBT social scene contributes towards its image nationally as a notably ‘gay-friendly’ city. Denise, who recently moved to Lancaster and attended the LGBT Histories event, explained that “Up here it was alright to be out, so that was one thing coming up here”. However while, she “expected there to be a vibrant [lesbian] community because historically there had been” she commented, “I haven’t found that.” Instead, she said, “I found it really hard to find a way in – and I still haven’t found a way in, really” because she feels older members of the lesbian community tend to socialise at each other’s houses, rather than in public spaces.

LGBT Groups in Lancaster and Morecambe

The LGBT Histories event highlighted the importance of local LGBT groups, including Out in the Bay, the youth group, PYRO (‘Proud Youth R Out’) and the two university LGBT groups. Such groups provide vital, safe spaces for members of the LGBT community to meet others, make friends and find support.

Ruth was involved in running PYRO in the late 1990s. She discusses here why she feels there is still a need for groups like this because of the challenges faced by LGBT young people growing up in smaller, provincial places such as Lancaster and Morecambe.

David grew up in the local area and was involved in a gay youth group, then in Lancaster University Gay Soc. He describes here how as a young man he was motivated by Section 28 [1] to get involved in politics, travelling down to Manchester by coach with others from his group to take part in his first demonstration, and he explains how taking part in such action helped to build his network of friends.

David’s story reminds us that the link between LGBT social life and LGBT activism in our region clearly has been – and remains – a powerful one.

In May 2014, Global Link held a local LGBT Histories event where participants brought LGBT magazines and newsletters, t-shirts and badges, which were photographed; others contributed memories and recorded short interviews.