Enthusiasm, apathy and perseverance for the League of Nations Union
by Christine Workman
Share 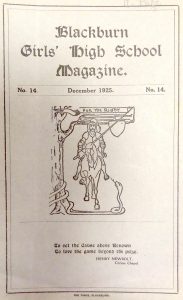 A lecture by Miss Forchhammer of the Danish Delegation to the League of Nations in 1922 indicated that the school was keen to engage with the ideals of the League of Nations. A junior branch of the League of Nations Union (LNU) began in the school in February 1926 and had 166 members by the summer term, each one representing a League country. The branch had the support of the Headteacher and several staff, who gave their copies of LNU newspaper, ‘Headway,’ to its members. The branch was active between 1927 and 1929 with further lectures by Miss Forchhammer and Mr Harold Bing of the British Federation of Youth.

Members attended some Blackburn LNU meetings and organised newssheets and a library for the school. Some leavers in 1929 also joined the local LNU branch. However, the school magazine records that pupils lost interest between 1930 and 1933 and that support for the branch faded. Interest revived briefly for a lecture by Lord Noel-Buxton on disarmament in November 1932 but it was not until 1934 that a junior branch could be sustained, possibly due to a programme that included two external speakers and an organised internal event that presented a talk, dances and a play. The branch continued with a variety of events, including a debate with Blackburn Grammar School’s LNU on rearmament (1936) and lectures by two LNU speakers and two members of staff. The last report on the branch is given in the December 1938 school magazine.