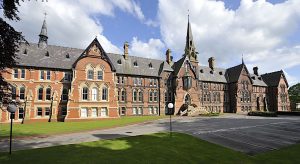 The League of Nations Union (LNU) was popular at the school from the 1920s until the middle of the 1930s. As early as 1926 over 100 pupils attended a meeting of the LNU at the Parish Rooms in Cheadle Hulme. They held regular meetings and lectures at the school. (1) These were organised by a School Committee, with the Headmaster as President and supported by staff.

The school magazine, ‘The Waconian,’ gave a detailed account of most events. Lectures were topical and dealt with key international issues, giving pupils an understanding of the politics involved. In 1935 pupils heard Mr Alden Alley, a prominent American speaker on international affairs, talk about ‘Hitler and Germany.’ He outlined Germany’s history and Hitler’s policies, concluding that the League nations needed to work together and deal with Germany by pacification. The Abyssinian crisis  was ably explained to the pupils (October 1935) by a staff member who had visited the country. The following year the school heard two (LNU) lecturers: Mr Gillinder spoke about the International Labour Office’s work and Mr Archer gave an open-air lecture on the Abyssinian crisis. Pupils were divided on whether Britain, France or both were to blame for the lack of League action. Pupils also heard Cheadle Hulme’s vicar talk about ‘Modern World Movements,’ and the Annual Joint Meeting with the Old Waconians focused on Austria in 1936 and ‘Danger Spots of Europe´ in 1937. In May 1939, Mr Archer returned to discuss the League’s failures and possible solutions. (2)