International Guiding Between the Wars 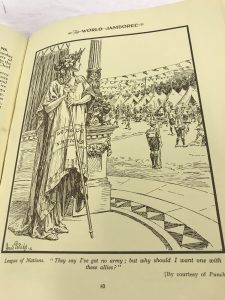 In 1924 the Girl Guides held their first World Camp at Foxlease in Hampshire. Guides from around the world set up camp, held parties and entertainment including dances from their own countries. The Chief Scout’s Welcome quoted from Buddha: ‘There is only one way of driving out Hate in the world and that is by bringing in Love.’ (1) In 1929 local Guides ran the hospital at the World Scout Jamboree at Arrowe Park in Birkenhead which hosted 50,000 Scouts and over 300,000 visitors. The Guides, described by Major Ritchie as ‘Trojans,’ treated 321 hospital admissions and 2323 outpatients. (2) The Scouts and Guides wanted to portray a message of peace. A cartoon published at the time showed the League of Nations looking at the Scouts saying, ‘They say I’ve got no army; but why should I want one with these allies?’ (3) 1st Windermere Company went to the Jamboree and met a group of Guides from Poland. They couldn’t communicate to start with but they found out their common language was French so they communicated in that. (4)

In August 1939, despite the fact that war was imminent, nearly 6000 brave Girl Guides from across the world went to Hungary for a summer camp called Pax Ting (Peace Conference). Jessie Bellamy, a Ranger from Kettering, reported that ‘not one of the persons present at this will ever forget the thrills of international camping and the spirit of happy fellowship which we have enjoyed for two weeks.’ (5) In November 1939, after war had started, 1st Kendal Company still celebrated World Fellowship Week with the Brownies by doing different cultural dances and then ‘managed to struggle home at 6 through the blackout thrilled with the afternoon.’ (6) In July 2020 180 Guides from the Northwest will go to the European Guides and Scouts Jamboree in Poland. At the briefing weekend in October 2019, a Young Leader from 3rd Parbold and Dalton Unit described how, even though people didn’t all know each other before, the Guides ‘got organised into our tents and we all got along like one big family.’

(2) Information from a plaque mounted underneath one of the Arrowe Park Jamboree hospital flags, held at Hadlow Fields Girlguiding County Campsite and Activity Centre in Willaston, Cheshire.