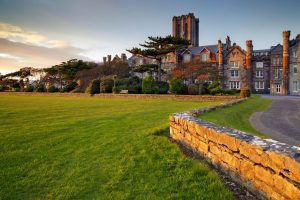 King William’s College was founded in 1833 as a boarding and day school for boys. (1) It provided a wide range of extra-curricular activities. There is no evidence of League of Nations Union  (LNU) speakers at the school. However, there was a very active debating society, with the Headmaster as its president. The debates covered many different aspects of life, some light-hearted, some serious, with several focusing on topical issues, including international ones. Debates were written up at length in ‘The Barrovian.’

Belief in the League of Nations  was in short supply in 1918 and again in 1921, when pupils put more faith in the British Empire as a peacekeeper. The latter debate, repeated in 1932, also favoured the British Empire. However, in 1926 pupils voted for a proposal that peaceful persuasion was more effective than force. They also discussed at length, and agreed, that Esperanto should be the universal language to stop misunderstandings. Disarmament was the focus of a debate in 1930, calling on all nations to disarm in ten years. The motion was lost after arguments of unemployment, technical difficulties and requirements of peace first. In 1936 pupils debated Abyssinia and Britain’s role in the dispute and in 1937 the role of nationalism was discussed. After the Munich Crisis (1938), pupils approved of Chamberlain’s policy. A second debate on compulsory national service was also passed. Members of the Debating Society also voted against returning Germany’s colonies to her, believing in England’s ability to defeat Germany at any time. (2)