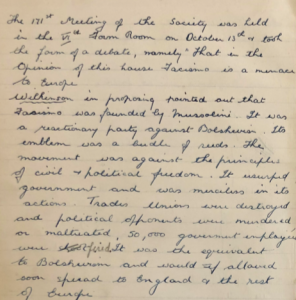 Lancaster Royal Grammar School (LRGS) was founded between 1235 and 1256 and endowed in 1472 by John Gardyner. In the 19th and 20th centuries it developed a connection with the armed forces and it has a number of notable former students. Although the school did not have a formal League of Nations Union society, there was clearly much discussion of and interest in international and political issues through the already long-established debating society, the Whewell Society (1) whose minutes record the debates, and the LRGS magazine, The Lancastrian. (2)

A range of topics was discussed. At Speech Day in October 1918 the visiting speaker’s address on the end of the War referenced the League of Nations alongside comments on the need to maintain the military, a sentiment echoed in April 1922 in the Officer Training Corps report ‘War is over […] What is the use of the OTC?’ (2) In October 1923 the debate ‘Fascism is a menace to Europe’ referenced international peace. (1) At the penultimate society meeting in 1924, comment was more overtly supportive of the League within the debate ‘Civilisation has been more of a curse than a blessing to mankind.’ (1) One speaker argued that ‘Civilisation had brought in the League of Nations, the herald of peace and goodwill.’ The issues surrounding international tension continued to capture interest with the motions ‘Disarmament is possible’ and ‘Disarmament is Imperative’ being debated in November 1925 and February 1930 respectively. (1) It was reported in July 1929 that one ‘Old Lancastrian’ had become Student Chairman of the League of Nations society at his university. (2) A focus of debate on international affairs continued through the 1930s with emphasis on appeasement and fascism, and the threat posed by communism.