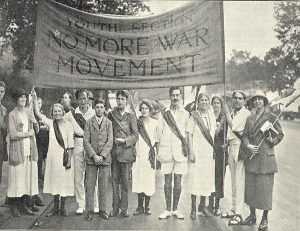 Members of the youth section of the No More War Movement, October 1924
© Peace Pledge Union Archive

The No More War Movement (NMWM) was founded in 1921, growing out of the earlier No Conscription Fellowship which had been active during the First World War. Both these organisations had socialist as well as pacifist principles. The NMWM became the British Section of War Resisters’ International. It grew rapidly and at its height had 94 local branches. From 1922 NMWM began to organise annual national demonstrations. Similar demonstrations were also held in many countries internationally. In 1927/8 NMWM produced a Peace Letter signed by 128,770 supporters who refused ‘to support or render war service.’

In 1932 the NMWM put forward plans to produce a Peace Book, to counter the Government’s War Book, an official publication that instructed the public how to prepare for the ‘inevitability’ of war. In that same year the movement planned a campaign to send over 1000 telegrams to the British delegation at the World Disarmament Conference. It also presented a petition, signed by 1,475 organisations, calling for unilateral disarmament. In 1934 membership stood at almost 3000. By 1936 this had fallen to just 1771. The Spanish Civil War had tested the resolve of many members, many of whom wanted actively to support the Republican side against the fascists. In 1937 NMWM merged with the Peace Pledge Union.