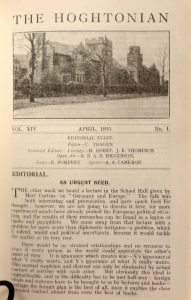 The Hoghtonian, the school’s magazine, is only available for the 1930s, so nothing is known of the school’s involvement with the League of Nations in the 1920s. There may have been a junior branch of the League of Nations Union (LNU), as in 1934 it was suggested to the School Parliament (a sort of School Council) that a League of Nations Society should be reinstated. It was reported that this was laughed at and then discussed before being rejected. Pupils argued that they could not stop a war as in Manchuria and that there was a local branch of the LNU in Preston. The idea of allowing such a society to start and grow was considered but rejected.

This ambivalent attitude is reflected in a survey of the school, entitled ‘What we think about the League of Nations’ in 1932. Generally, the lower forms were described as extravagant in their praise and ‘the upper forms scathing in their criticism.’ The school was divided as to whether America’s help might make a difference. The cost of running the League was criticised by many, being perceived as a waste of money and providing holidays for delegates to Geneva. Many thought the League acted too slowly and quoted China as an example. Disarmament was seen by many as a threat to employment, whilst a fourth former pointed out that disarmament would not stop war. Lectures were given on a wide range of subjects, including International Issues by LNU speakers (1937,1938). The Dramatic Society presented Drinkwater’s ‘X =O’ in 1937.