The Five-Power and Nine-Power Treaties
by Caroline Morrison
Share 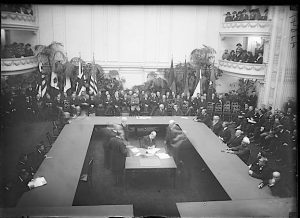 With the foundation of the League of Nations in 1920 came hope for a policy of disarmament amongst the major world powers, the greatest of which was now the United States. Between 1921 and 1922 the world’s largest naval powers gathered in Washington for a conference to discuss naval disarmament and the growing tensions in the Far East.

The Five-Power Naval Limitation Treaty, signed by the United States, Britain, Japan, France and Italy, included an agreement not to build any new battleships and to maintain each nation’s naval tonnage according to the ratio 5:5:3:1, thereby entailing the scrapping of many warships. The Nine-Power Treaty was signed by the U.S., Britain, Japan, France, Italy, Belgium, the Netherlands, Portugal and China, guaranteeing the integrity of China and enabling countries to trade freely without discrimination. However, the treaty recognised Japan’s dominance in Manchuria, which would prove to be a problem for the League of Nations in the 1930s.