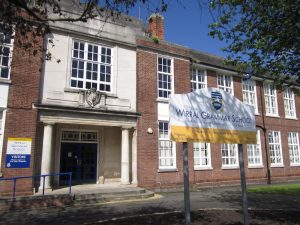 Wirral Grammar School for Boys (WGSB) was extremely active politically from its founding in 1931 and throughout the 1930s. This legacy continues at the school today. Unfortunately, we were bombed by the Luftwaffe during WW2 and many school documents, including magazines and student records, were lost. During the early days of our school a pupil whose family had re-located from Yorkshire came to the school and would have (and still has) an important influence on school life – Harold Wilson. In the febrile atmosphere of the 30s Wilson started the Debating Society, which attracted students and staff from different political and social groupings: Marxism, Socialism, Pacifism, Toryism, Internationalism, Liberalism… and, yes, Fascism were all debated at school at a level rarely seen today. Indeed, the interest in events in Italy and Germany proved such that pupils and staff from the school visited Nazi Germany on two occasions after 1933. This is not to suggest that the school embraced these values; far from it, but there was a general feeling of internationalism at the time from all political sides at WGSB. I would suppose that visits to the Soviet Union were virtually impossible for school groups during this period. I have no doubt that had trips been available we would have gone!

Most of our 1930s history has been gleaned from word of mouth, letters and former pupils’ recollections, including Wilson himself. Some of these letters survive and some biographers and interested parties have interpreted them to show Wilson as a major post-WW2 internationalist.