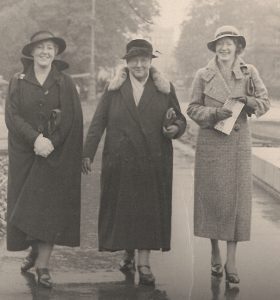 The Women’s World Committee Against War and Fascism was formed at a congress of more than 1200 women from around the world in Paris in August 1934. More than 70 delegates from Britain attended. The Committee published its manifesto that same year: ‘Germany, Italy, Austria, Poland, Hungary, the Balkans, Portugal, have been transformed by Fascism into tremendous convict prisons. Fascism has deprived women of the Social Status which, although still low, she had won at the price of struggle through so many years. It has made her once again a passive servant of man, eternally dependent, deprived of all her rights, a human machine good only for obtaining the future victims of the slaughter which is the logical consequence of this situation. The picture of the unheard of and undescribable tortures which are inflicted on the people by the Hitler terror fills us with a profound horror, which awakens and strengthens in us the feeling of solidarity which ties us to our brothers and sisters in Germany. We shall know how to support with all our strength the battle which they are continuing to carry on during their defeat today.’

Selina Cooper from Nelson became active in the British section of Women Against War and Fascism (WAWAF).