The Peace Pact of Paris
by Caroline Morrison
Share 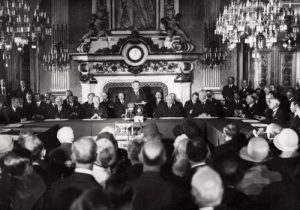 The Kellogg-Briand Pact was drafted by the United States Secretary of State, Frank Kellogg, and the French Foreign Minister, Aristide Briand. It was signed on 27 August 1928 by 15 nations whose signatories condemned the ‘recourse to war for the solution of international controversies and renounce[d] war as an instrument of national policy in their relations with one another’, agreeing that ‘the settlement or solution of all disputes or conflicts… shall never be sought other than by pacific means.’ (1)

Although this was only a verbal renunciation of war, it was seen by the groups working for peace as a major step forward, reinforcing the commitment to peace and arbitration and paving the way for some measure of disarmament. The involvement of the United States was of tremendous importance given that she was not a member of the League of Nations and her support was crucial if disarmament was to become a realistic goal. 65 nations finally signed the Pact. (2) The signing of the Pact gave a huge boost to the peace campaign in Britain and enabled groups like the Women’s Peace Crusade  to re-form in order to educate the British people in international affairs, support the League of Nations  and encourage politicians to take up the cause of peace in the belief that there was a universal desire for peace amongst the peoples of the world.