Peace and the General Election 1929
by Caroline Morrison
Share 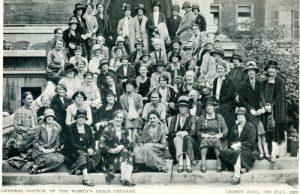 The Women’s Peace Crusade (WPC) was re-formed in 1928 following the success of the Peacemakers’ Pilgrimage in 1926 and the granting of equal suffrage in 1928, thus continuing the work of the organisation of the same name founded during the First World War. The WPC was an umbrella group comprising political, religious and women’s groups, coordinated by a national committee. The aim of the WPC was to make peace a central issue in the forthcoming 1929 election. Members demanded that prospective parliamentary candidates of all parties stated publicly their position on peace. With this aim they sent a written questionnaire to candidates in 300 constituencies. (1)

The WPC organised meetings and carried out house-to-house canvassing to encourage the public to take an interest in global affairs. It was claimed that 50 meetings were held in Huddersfield. (2) The aim was to ensure the 1929 election ushered in a ‘Parliament of Peacemakers’.

C. Morrison, 1996. World Without War: A Study of Women’s Involvement in the Peace Movement 1914-1939. PhD thesis, Lancaster: Lancaster University.
J. Liddington, 1989. The Long Road to Greenham: Feminism and Anti-Militarism in Britain since 1820. London: Virago.
The Women’s Peace Crusade in the North West