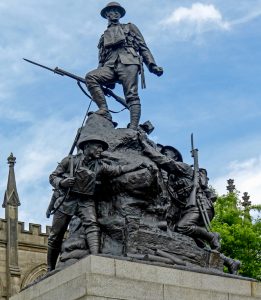 An insight into the events of a Peace Week held at Oldham in March 1938 is given by an account written in a school magazine by two pupils who were members of the local Hulme Grammar School for Girls’ League of Nations Union (LNU) Society. They explained that the Week’s purpose was to persuade people to ‘consider what war really meant and to think seriously what individuals could do to prevent it.’ The Week began and ended with mass meetings addressed by local MPs and special services were held in many churches. There were two exhibitions, one for adults and one for children. The latter had a collection of pictures and photographs about life in other countries. The student account commented that by exhibiting toys, comics, photos etc that the exhibition showed how in many ways ‘all children are alike.’

A shop provided literature on the League of Nations and the International Peace Campaign. Anti-war plays were performed by the Oldham Repertory Theatre Company and by amateurs, including pupils of Hulme Grammar School for Girls who performed ‘X=O,’ by Drinkwater at their school for both pupils and parents. Mr Crossman repeated a lecture he gave as part of Manchester University Extension lectures. It was entitled ‘Can Democracy Survive?’ A special women’s meeting was addressed by Mrs Israel Zangwill (Edith Zangwill), a suffragette and author who believed in women’s rights. Senior girls from the school attended both these meetings.