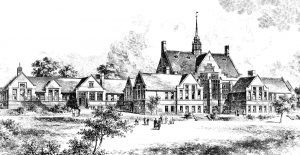 The school formed a junior branch of the League of Nations Union  (LNU) in 1929, probably inspired by Dame Sarah Lees, a school Governor for 45 years and a Chairman of Oldham Branch of the League of Nations Union. Known as The League of Nations  Society it met regularly, four or five times a year, providing a varied programme which was organised by the pupils, with oversight by a member of staff. The Society had at least one external speaker a year, drawn from local institutions (e.g. Rev. W. H. King of Oldham LNU in 1929 and 1932; Anthony Crossley, MP in 1933; and Mr Mallalieu, MP on Abyssinia  in 1935) or from the League of Nations Union (LNU) such as Mr Starkey in 1931 and Frederick Whelen  in 1932. Staff members also contributed such as Miss James on Russia (1931) and Miss Taylor in 1934 on the National Declaration  (The Peace Ballot). Papers on League issues were presented by the Society members throughout the 1930s.

The Society used drama to get the League’s message across to the school. In 1930 they performed two anti-war plays, ‘Brother Sun’ by Houseman, and ‘Bringing it Home to Mr Chibley’ by Bloye. They repeated the former in 1932. ‘X=0’ by Drinkwater, was performed during Oldham Peace Week  in 1938. Pupils visited peace exhibitions in Manchester (1931) and Oldham (1938). The Society also borrowed lantern lectures, a portable exhibition and posters from the LNU HQ and organised competitions on the League of Nations for its members.