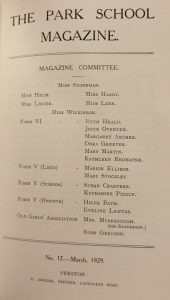 Frederick Whelen, a key speaker for the League of Nations Union (LNU), lectured to pupils from Preston secondary schools at a public meeting in March 1923. Park School’s pupils attended and learned about some of the successes of The League of Nations. However, the school did not form a junior branch of the League of Nations Union until 15 years later, after another visit by Mr Whelen. The junior branch was promoted by a few pupils who had attended the LNU Summer School at Geneva the previous year and it remained active until the Second World War, with a membership of 80 in 1938. This was a reversal of the pattern seen in some other North Western schools.

The History Club was the main proponent of the League of Nations in the years 1924-1938. They organised a League of Nations Assembly where senior pupils and staff took key roles in 1927. At another meeting in 1929 pupils studied the speeches of Streseman and Briand. In the 1930s the Club organised speakers, a Peace Ballot debate and presented papers on the history of the Abyssinian Crisis. The historians also discussed a reformed League of Nations as an alternative to war. They lost a debate with the Science Society, having proposed that History is better training for citizenship than science education. A lecture programme for the school included Donald Grant on international issues annually from 1937-39. The junior branch also showed two LNU films and sent some pupils to Geneva in 1938.