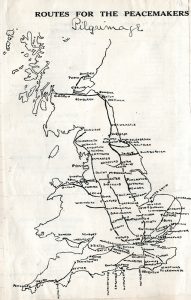 The Lancaster Guardian 22 May 1926 reported that pilgrims had set out from Carlisle on 20 May (although later reports were that this part of the route had been abandoned). On Wednesday 19 May an ‘enrolment’ meeting was held in Lancaster and over 50 people signed up in advance to join in the planned procession in Lancaster the following weekend. Pilgrims from further north were expected to arrive in Lancaster at 5pm on 29 May.

The 5 June edition of the paper reported that 10 cars carrying 40 people had set off from Bentham towards Lancaster on Saturday 29 May. On the way meetings had been held in Ingleton, Melling, Wray, Hornby, Caton and Halton. On arrival at Lancaster the pilgrims were given tea at the YMCA Hall in China Street. An evening meeting was held at ‘High Street Schoolroom.’ Around 150 pilgrims assembled on the Sunday morning outside the Town Hall. A procession , which included ‘police, ambulance men and nurses’ took place. Then, at 2:30pm, three decorated motor vehicles carrying pilgrims left Market Square for Galgate, Garstang and Preston.