Promoting Citizenship education in the 1920s; Corporate membership of the League of Nations Union
by Christine Workman
Share 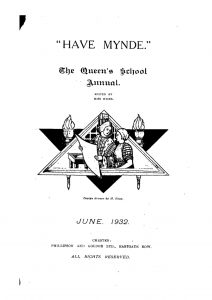 The Queen’s School was founded in 1878 as The Chester School for Girls. (1) It was ably led by Miss Clay from 1903-1925. She advocated Citizenship, being a founder member of the Chester Women Citizens’ Association (CWCA) in 1919. She introduced Civics as a new subject in the school curriculum in 1922. The school magazine, ‘Have Mynde,’ reported that girls were encouraged to be active citizens by volunteering in social work and being aware of local politics, even if they could not vote till 30. Membership of organisations like the CWCA was encouraged as a good training ground for a political career, even becoming an MP. The school organised a mock General Election in 1922 with pupils standing on various issues of disarmament. Free trade was debated by the whole school in 1924 and parliamentary candidates addressed the school separately for the 1925 General Election.

In 1926 the school hosted a League of Nations Union (LNU) meeting for all five Chester secondary schools. Consequently, all schools became corporate members of the LNU. At Queen’s, 60 girls also took individual membership. Pupils attended at least one LNU lecture annually for the next ten years. Speakers from the LNU included Frederick Whelen in 1931 and 1937 and Walton Starkey in 1934. In 1936 pupils entered an essay competition on the League of Nations organised by the local branch of the LNU. Individual membership varied between 50 and 80 pupils, but declined in 1937 to 33 members. There are no further reports of the LNU in the magazine. (2)

(1) The Queen’s School. History of the School