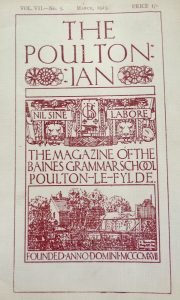 The school’s attitude towards the League of Nations  gradually changed in the 1920s from ambivalence to being supportive. Every pupil had written an essay on the League in 1923, in which some of its ‘fallacies’ were stated. The school magazine commented that ‘we have yet to meet the English boy who really believes in it or even wants it’. The school had lectures from the League of Nations Union  (LNU) in 1925 (Mr Whelen) and 1929 (Mr Wilson), as well as some contact with the local Rotary Club and the Blackpool LNU Branch. This resulted in the formation of a junior branch of the League of Nations Union at the school in December 1929. A great achievement was that all the pupils and staff members joined the LNU.

Baines Endowed became a very active school branch. It produced its own news sheet on League issues at least every term. Lantern slide lectures on the League were given and in 1930 pupils performed the anti-war play, ‘X = 0.’ They were placed fifth on the FIDAC Peace Medal  list, ‘deserving special credit.’ Students supported local LNU meetings by delivering advertising flyers and attending meetings (Poulton 1930, 1932). Two pupils had their peace posters exhibited in London, after entering LNU President, Lord Cecil’s, competition (1932). Mr Archer, LNU speaker, lectured on three occasions in the 1930s on the Manchuria crisis, disarmament and the Abyssinian crisis. Boys read novels and plays concerned with League issues and performed A. Fenner Brockway’s play ‘A Devil’s Business’ in 1932.