Fenner Brockway is a significant figure in British twentieth century politics. An ardent socialist and pacifist, his long political career had important connections with Lancaster: he stood twice, unsuccessfully, for election to the local parliamentary seat in 1922 and 1941. David Greenall charts Brockway’s lifetime of political engagement ‘inside the left’ and thereby provides a useful context for analysing Fenner’s early activism, which was stimulated in part by the outbreak of the First World War. >> READ MORE

In this article, Nick Beddoe focuses on this early period in Brockway’s career, including his co-founding of the No Conscription Fellowship (NCF) in 1915, an organisation which campaigned against conscription and provided support for those who fell foul of the law for refusing military service. Brockway himself was imprisoned for his NCF activities and, as Nick suggests, his well-known pacifist stance may have contributed to some hostile publicity during his first parliamentary campaign in Lancaster a few years after the war.

Fenner Brockway: Founder of the No Conscription Fellowship, MP, Lord and Advocate for Peace 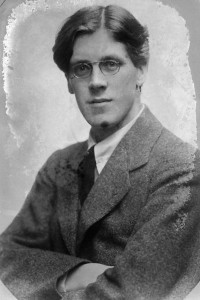 The purpose of this piece is to look at Fenner Brockway, who, after the outbreak of the First World War formed the No Conscription Fellowship (NCF). Initially conscription was not an issue, although it was seen as a cruel blow to the Independent Labour Party (ILP) when, in 1914, the workers ‘marched off relatively happily to war’ (Ellsworth-Jones, 2008: 84). At the time, Fenner was editor of the Labour Leader, which was the paper of the ILP, and many of its members were decidedly anti-militaristic. Fenner, as he so often did throughout his long and distinguished career, looked to the future and, along with many others, saw conscription on the horizon. He avoided ‘protracted ideological argument’ with fellow ILP members over policy (Ellsworth-Jones, 2008: 84), and was ably assisted by his wife who wrote a letter to the Labour Leader, which he published. It stated ‘It would perhaps be well for men of enlistment age who are not prepared to take the part of a combatant in the war, whatever the penalty for refusing, to band themselves together so we may know our strengths’ (cited in Ellsworth-Jones, 2008: 84).

Fenner and the No Conscription Fellowship

Thus the No Conscription Fellowship became a viable entity, with Fenner becoming the secretary of the NCF paper, The Tribunal. The formation of the NCF was principally as a result of the both the ‘Derby Scheme’, which was the recruitment drive by Lord Derby, and the fact that conscription was imminent. The NCF was made up of some inspirational characters, including Clifford Allen, Bertrand Russell, and Edward Grubb. Grubb, who became the treasurer of the NCF and was also a Quaker, was regarded as ‘the father of the movement’ (Brockway, 2010: 67). Catherine Marshall, who often came to Fenner’s rescue, was seen as one of the most exceptional members, given her ability to hold the NCF together (Brockway, 2010). The NCF was constantly under attack and, with no support from Labour Party or the unions, had to contend with everything from the Defence of The Realm Act, which could often mean imprisonment, through to having their printing presses smashed and copies of The Tribunal seized and destroyed. However, the No Conscription Fellowship always bounced back.

It would perhaps be well for men of enlistment age who are not prepared to take the part of a combatant in the war, whatever the penalty for refusing, to band themselves together so we may know our strengths.

Eventually, the conscientious objectors (C.O.s) began to be court marshalled. Some took alternative duty. Others, however, were absolutists. Some died and nearly all were treated badly, often appallingly. Fenner was imprisoned and his diary of his time there includes accounts of being kept in isolation, the various methods of communication and sympathetic prison staff. The prison paper, The Walton Leader, was produced twice weekly and, written on forty sheets of toilet paper, records some of the most riveting accounts of his time in prison.

Fenner’s Experience of Prison as a C.O.

There appear to be few times in his life when Fenner lost some of his resolve but unsurprisingly a couple of these occurred during his imprisonment. In his autobiography Fenner describes that he wrote mainly about unusual incidents but he goes on to say that ‘In doing so [he] may have failed to give an impression of the deteriorative effect of prison life’ (Brockway, 2010: 103). The C.O.s were mostly ‘Hard Labour Prisoners’ (Brockway, 2010: 103), but, unlike other prisoners, they had a degree of comradeship and the fortitude that comes from a belief in their principles and convictions. On one occasion the prisoners erupted, the catalyst being the imminent execution of an inmate. Fenner describes the scene thus: ‘Within a few minutes from cell to cell the nervous storm spread; every prisoner appeared to be thundering at his door in a fury of pent-up emotions which swept reason away. I had the greatest difficulty in not joining in. I stood at my door, my fists clenched within an inch of it, my whole body tense, my arms vibrating, my teeth clenched, a bursting pressure in my head…. To me it brought futile despair. I flung myself on the ground and held my head tight in my arms to overcome the temptation to crush it against the wall’ (Brockway, 2010: 103-4).

A few years after Fenner’s release from prison in 1919, he became the prospective Labour candidate for the Lancaster Division. This was an interesting election in many ways, particularly given that it was only four years since the end of the war. Fenner wrote letters throughout 1921 and 1922 to the then Lancaster Observer and Morecambe Chronicle,sometimes in response to letters that had been directed at him and others that explained his socialist views. He also wrote letters about current issues that he felt were of importance, such as The Genoa Conference, which, he said, ‘Represents a belated realisation of the truth of the Labour principle that to harm other people is to harm oneself’. He also went on to say that the Treaty of Versailles was disastrous and that ‘If Britain and America had acted courageously together at the Versailles Conference, we might have had a decent constructive conciliatory treaty. Instead the British delegates surrendered to French Imperialism, and we had a vulgar treaty of vengeance and hate’.

The C.O.s were mostly ‘Hard Labour Prisoners’, but, unlike other prisoners, they had a degree of comradeship and the fortitude that comes from a belief in their principles and convictions.

There was some hostility among Lancaster voters towards Fenner’s pacifist views. For example, a letter from ‘A Bereaved One’ to the Lancaster Observer and Morecambe Chronicle states:

‘It is well known that Mr. Brockway’s conscience would not permit him to lift a finger to protect our women and little ones from violation, injury and death…. What guarantee have we that if the workers of this division send the Labour candidate to Westminster, that his extreme views will ever be modified? His conscience will presumably not allow him to vote for a single penny for the defence of our country, and we should be at the mercy of any warlike nation. Such a number of your readers have lost too many relatives in the war that they cannot support a person who would fail us in our hour of danger.’

Another letter to the same newspaper from ‘An Old Volunteer’ states:

‘Mr Brockway evidently is a “peace at any price” man and I contend that the House of Commons is the last place in the world for a person who entertains such opinions…. if all of us had been of Mr. Brockway’s frame of mind we should have been German vassals, and our women the victims of their debauchery… One would think that the community was in no mood to pay any attention to such an exponent of passive Socialism.’

A ‘Working Man’ wrote in to agree with the above letter, saying that:

‘No right-minded Britisher is in favour of violence and force; but he is in favour of defending himself against it, rather than cringe behind some concocted scheme of objection. The sooner the Labour Party of Lancaster realise the mistake they have made in adopting a Socialist with extreme views, the sooner they, I feel sure, will break away from him and his friends, and find a true representative of the British working man.’

As polling day approached, Fenner found himself accused of various wrong-doings, including accusations that Lord Ashton’s workforce had been subject to intimidation. A letter signed by ‘Representatives of The Various Works’ sent to Lord Ashton and published in the Lancaster Observer and Morecambe Chronicle states that ‘It would not be possible for the workpeople of any business concern to be more free from improper influence on the part of their employer than those of your Lordship’. Lord Ashton’s reply goes on to say ‘I thank you very much more than I can express for your letter, and for the copy of the resolution passed at a meeting of my workpeople.’ Fenner was also accused of describing local boiler-men and stokers as ‘drunkards and boozers.’ In response to this, Fenner wrote a letter stating that he never made such a statement. He also said ‘I hereby give notice therefore that if this statement is repeated, I shall take the necessary action to deal with the matter publicly’.

Mr Brockway evidently is a “peace at any price” man and I contend that the House of Commons is the last place in the world for a person who entertains such opinions.

At the Declaration Fenner won 9,043 votes. The only other candidate (Conservative) won 19,571. The turnout was 80%, with 66 spoilt ballot papers. Throughout the election it would appear that Fenner acted with great dignity, even as the post-mortem was taking place. He thanked all those in Lancaster who had helped him, his wife, and also the press, who not only showed bias in favour of the Conservative candidate, but who also produced some scathing comments about him in what can only be described as rude and vindictive letters.Fenner was, however, surrounded by supporters. He had fought a good fight, holding meetings not only in Lancaster but also outlying villages such as Overton and Galgate. Fenner had even encouraged the polling station to have extended hours so that rural and railway workers would have time to cast their votes. To conclude, Fenner Brockway is, for me, an inspirational character. He could inspire others to not only believe in their own self worth but also to follow through with their convictions, regardless of the difficulties faced.

To conclude, Fenner Brockway is, for me, an inspirational character.