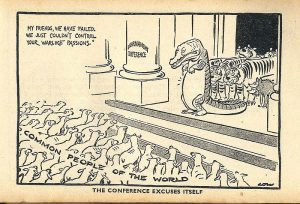 The lack of agreement on any meaningful disarmament was a constant frustration to the peace movement. The signing of the Locarno Pact in 1925 and the entry of Germany into the League of Nations  in 1926 encouraged the movement to demand a conference on disarmament. The opening of a Preparatory Commission on Disarmament in Geneva on 18 May 1926 was a direct result of these developments. Lord Cecil was the official representative of the British Government. He was an ardent supporter of the League of Nations and of women’s contribution to the peace movement. He urged the peace movement to mobilise public opinion to apply political pressure to governments to agree measures that would lead to further disarmament. The Peacemakers’ Pilgrimage and the Women’s Peace Crusade resulted from this.

However, Lord Cecil was aware of Britain’s need to maintain a strong navy to protect her trade routes and her imperial interests. The United States was the major power after the First World War and wanted naval supremacy. Japan also wanted to maintain her naval dominance in the Pacific. It was, therefore, unsurprising that the Preparatory Commission convened in Geneva in 1927 confirmed the quotas as agreed at the Washington Disarmament Conference  in 1921 but failed to agree any further reductions. Finally, the long awaited World Disarmament Conference took place in Geneva in 1932-34 but by then the international situation had worsened and the rise of fascism ended any hopes for an agreement on disarmament.