Sedbergh School Junior Branch of the League of Nations Union 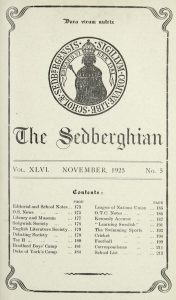 The Sedberghian No. 5,  Nov 1925
Courtesy of Sedbergh School

The school was one of the earliest in the North West to support the League of Nations. A junior branch of the League of Nations Union (LNU) began in November 1923, with all staff members joining. Lectures from Professor Gilbert Murray and Frederick Whelen cemented the school’s support. By 1925 League literature was available and they planned a ‘mock Assembly’ of the League. Pupils performed ‘X = O’ by John Drinkwater at Kendal in 1928 and in 1929 welcomed Commander Lewis, RN, to speak on ‘The Freedom of the Seas.’ A teacher also read a paper on disarmament that year.

By 1931 membership had reached 119 and the school used a gramophone to listen to League of Nations speeches. Film was increasingly used in the 1930s to attract members, for example, ‘War is Hell’ (1933), ‘Thunder in the Air’ (1935) and ‘The Doomed Battalion’ plus an LNU trailer, ‘Peace of Britain’ (1936). The school had difficulty in getting speakers, but did hear Norman Poole on Great Power relations (1933) and Professor Darnley-Naylor  (1935). In Civics pupils discussed topical issues. The junior branch took a new direction in March 1937, away from films towards attracting those with an interest in international affairs. However, numbers declined, with only 13 pupils attending a talk on Spain. The school magazine, ‘The Sedberghian,’ suggested that this could be due to the general attitude to the League in 1937 ‘after its apparent failures’ but that it could also be the union’s fault. It appealed for pupil support but the outcome is unknown.