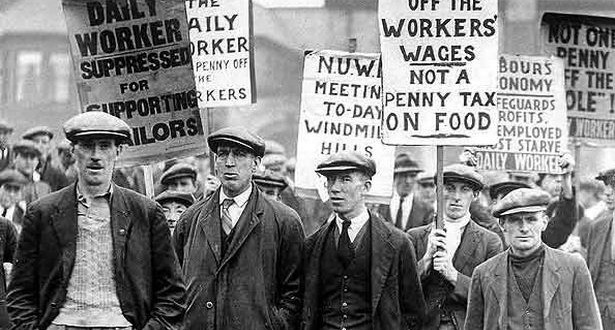 The General Strike began on the 4th May 1926 with between 1.5 and 1.75 million workers throughout the country striking in solidarity. What follows is an account of what happened in Lancaster.

Lancaster Workers and the General Strike of 1926 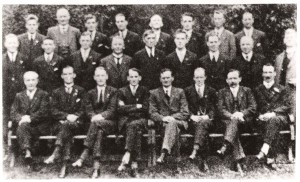 The General Strike began on the 4th May 1926 with between 1.5 and 1.75 million workers throughout the country striking in solidarity. What follows is an account of what happened in Lancaster. On Saturday 1st May 1926 the TUC Conference voted by 3,653,527 votes to 49,911 to approve a plan for a national strike to support the coal miners. The miners had been locked out of the mines after a dispute with the owners who wanted them to work longer hours for less pay.

In Lancaster, transport workers, postal workers, those working at local newspapers and craft workers employed by Waring and Gillow, Williamsons and Storeys came out on strike. Lancaster Trades Council formed a strike committee to gain support for the strikers. A strike fund was opened and collections were organised at public events. Lancaster Town Football Club and Kingsway Cinema gave permission for such collections to take place on their premises. The manager of the Kingsway cinema wrote, “I shall at all times be pleased to do anything I can for your society, and can assure my sympathy for your cause”. R.A. Beeley, the Chairman of Lancaster City football club, gave permission for a collection to be taken at a forthcoming home game. 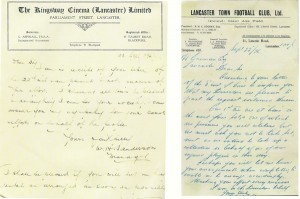 Scotforth Labour League was also involved in collecting money for the strike fund and concerts were arranged in support of the strike. One such concert, held at the Spiritualist Hall, was given by the band of the Independent Labour Party.

In Lancaster, as in other parts of the country, volunteers were used in an attempt to break the strike. The government had set up a strike-breaking organisation called the Organisation for the Maintenance of Supplies. Volunteers met with much opposition.

Lancaster and Morecambe strikers, for instance, protested as volunteers were used to drive buses and trams. The strikers and their supporters held a demonstration in Dalton Square in Lancaster and in Queens Square in Morecambe.  Strikers lined up across the road to prevent buses from proceeding to Lancaster. At Six Lane Ends in Torrisholme, seventy to eighty strikers assembled to stop buses. The action resulted in three drivers and one conductor being charged with assaulting a policeman. However, as the Lancaster Guardian recalled on 7th May 1942, the bus and tram companies were only able to maintain a skeleton service.

In Lancaster, transport workers, postal workers, those working at local newspapers and craft workers employed by Waring and Gillow, Williamsons and Storeys came out on strike.

The General Strike came to an end on the 15th May 1926 and many local workers returned to work with a Government promise of ‘no victimisation’. However, when members of the National Union of Railwaymen and some members of the Railway Clerks Association reported for duty at Lancaster and Carnforth, they were informed that certain men would be taken back but others would be sent for only when required. The men declined to resume work under these conditions, but it wasn’t long before economic necessity determined otherwise. Whilst most men were taken on, many were treated shabbily and were victimised for years after. 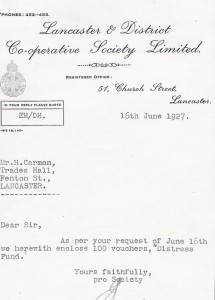 An interview with one of the men, Robert Rowley, was taken in the late 1980s. Robert describes his involvement in the General Strike [BOB ROWLEY AUDIO CLIPS]. The full recording is available from North West Sound Archive.

Workers were also victimised at Williamsons. About forty workers were still awaiting reinstatement twelve months after the strike had ended. This situation was echoed nationally even though the Government had made promises that there would be no recriminations against strikers.

Although the TUC had called off the General Strike, miners continued with their struggle against employers’ attempts to cut wages. They held on until December, when their leaders were forced to admit defeat. Miners returned to work and the employers’ demands were enforced.

As a result of the strike, Lancaster Trades Council set up a Distress Fund to help the miners and those Lancaster workers who were victimised and still without work. Some of the funds were used to buy vouchers from the Lancaster and District Co- operative Society on Church Street. 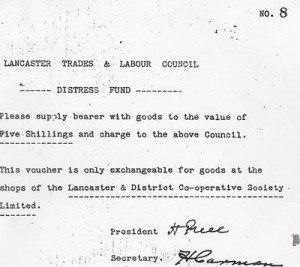 The photograph shown here is a letter from June 1927, in which the Co-op agreed to produce vouchers. There is also a picture of one of vouchers, for food and goods to the value of five shillings.

Historians have given a range of reasons for why the 1926 General Strike failed and one of the most common arguments is that, at a national level, strikers suffered for lack of support from the Labour Party and the TUC. Although it has not been possible to locate much evidence about the actions of the local Labour Party, there is plenty to suggest that the local trades council did much to support strikers both during and after May 1926.