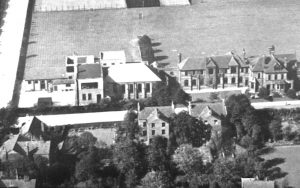 Withington Girls’ School was founded in 1890 by a group of eminent and far-sighted Manchester families who wanted the same educational opportunities for their daughters as were already available for their sons.’ (1) The school provided extra-curricular activities including hosting visiting lecturers, who covered a wide range of topics from classics to the washing of modern fabrics. There was an international focus, lectures being given on many different countries.

League of Nations Union (LNU) speakers visited the school between 1924 and 1936 and, in so doing, raised awareness of the League of Nations’ aims and the political crises that occurred. Frederick Whelen, who was to become the LNU’s key speaker, spoke about ‘the aims of the League and the obligations of nations to each other.’ The School Newsletter (1924-25) commented ‘we were all considerably wiser concerning the purpose of the League of Nations.’ In 1928, an LNU speaker outlined the work of the League. Mrs Helen Ford  spoke on ‘Tackling the world’s difficulties’ and the need to solve problems by discussion and common sense in 1932. Miss Pye spoke of her work for peace with the Women’s International League in China, explaining why the League was unsuccessful. Two LNU lectures in 1934 emphasised the ideals of the LNU as well as its activities. The Abyssinian Crisis  was the focus of informative lectures in 1935 and 1936, which focused on the issues facing the League, including collective security. In 1938 pupils had a lecture on the effects of the Civil War in Spain. (2)