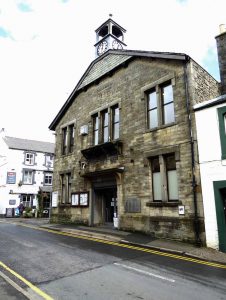 Helen Byles was a school teacher in the village of Newby before her marriage in August 1918 to Rawlinson Charles Ford of Low Bentham, whose family owned a silk mill. They were both Quakers and married at the Friends Meeting House in Settle. (1) Helen was an active member of the Northern Friends Peace Board in the interwar period. She was Chair of the Board from 1929-36 and again in 1939-41, as well as being a member of the Peace Committee from 1930-38 (2) and on the Committee of the Bentham Branch of the League of Nations Union.

Very little is known of Ford’s activities. In 1928, she gave a talk on the Kellogg Pact  at a garden party  held on behalf of the Lancaster branch of the League of Nations Union  at the home of a Miss Barrow. (3) She lectured on ‘The Hope for World Peace’ at the Friends’ School, Wigton  in 1928 and returned there in 1931 with William Fells to talk on disarmament. A third visit is recorded in 1935. (4) She also gave the 1932 League of Nations Lecture at Withington Girls’ School , Manchester. The talk was entitled ‘Tackling the World’s Difficulties’ and she explained how the League of Nations  was founded and how it aimed to serve mankind. She told the girls that the problems of the Nations were ’better solved by discussion and common sense,’ than by war. (5)