Annie Elizabeth Helme was a Suffragist and political activist, who made an enormous contribution to the role and status of women in society and who devoted her life to public service in Lancaster. She was, as Chris Workman explains, a real pioneer of equality for women 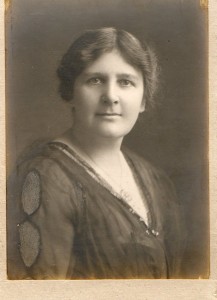 Born in 1875, Annie Smith may well have been introduced to politics at an early age through the activities of her father, Isaac Smith, who was Mayor of Bradford in 1883 and 1885. She later married into the Helme family from Lancaster and lived here, as a staunch Liberal, for the rest of her life. As the sister in law of Lancaster’s M.P., Norval Helme, she was politically active, first as a Suffragist and later as Lancaster’s first woman councillor, eventually becoming the first female Mayor of Lancaster in 1932. She gave her life to public service and became the first woman to hold the office of Chairman of the Local Education Committee in Lancaster and first woman magistrate for the South Lonsdale Division.

In 1911 Annie was a key player in setting up the Lancaster Suffrage Society, becoming the joint secretary, and she was instrumental in the organisation until the outbreak of war.

Annie married Walter C. Helme in 1900, a physician, son of the manufacturer of oilcloth at Halton Mill (Messrs Jas. Helme and Co). In 1901 they lived at 108, Queens Square. She was widowed (1908) by the time of the next census and living with her daughter, Frances, and two servants at Castramont, a large house in the Westbourne Park area of Lancaster, believed to belong to Norval Watson Helme [1].

In 1911 Annie was a key player in setting up the Lancaster Suffrage Society, becoming the joint secretary, and she was instrumental in the organisation until the outbreak of war [2].

Her political activity can be traced through reports in the Lancaster Guardian. A keen supporter of the Liberal party, she presided at the September Monthly Meeting, 1911, of the Liberal Association in Lancaster. The speaker was Miss Corbett of London, a Suffragette [3].  The next meeting, in October 1911, was again presided over by Mrs Helme and discussed the Insurance Bill.

When war was declared in August 1914, Mrs Helme was actively involved in relief work in Lancaster. The Lancaster Guardian of August 15th reported that she went on the Board of Guardians as part of a committee to set up a National Relief Fund. By September, sewing meetings were held in the Town Hall every Wednesday and Friday afternoon from 2-5pm.

Mrs Helme was appointed as Secretary of a Central Committee of Ladies to co-ordinate the relief work. The committee had three aims: firstly, to provide comforts for soldiers and sailors on active service; secondly, to provide necessities for the sick and wounded in hospital and thirdly clothing for those in distress in our own town (Lancaster). They even discussed evening meetings. A report in the Guardian said that the Town Hall and Banqueting Hall were ‘crowded with workers’, many of whom brought their own machines. By September 19th they had sent many items including a hundred pairs of socks.

Mrs Helme also continued her political interests, attending a meeting at the Hippodrome, Lancaster, where the St Mary’s branch of the Mothers’ Union discussed the question ‘Why we are at war’. More research is needed on her activities during the war.

In 1919 Annie was the first woman to be elected as a Councillor of Lancaster Borough Council. She had been supported in her campaign by the Liberal Women’s Citizens’ Committee which, along with the Cooperative Women’s Guild, Labour Women, the Independent Labour Party and the Citizens’ Defence Committee, organised a campaign against high milk prices in 1919 [4]. She stood for a seat in Castle Ward, in a by-election against Charles Pearson, recently discharged from the army, and won by only 12 votes [5]. By then, she was not only on the Education Committee, but also served on the Board of Guardians, and was a committee member of the Maternity and Child Welfare Committee of Lancaster Corporation.

At her first Council meeting, the Mayor was reported as saying that ‘he felt sure that members of the council would like to express the feelings of gratification and to offer a hearty welcome to the new lady councillor, Mrs Helme. They were very pleased to see her present (hear, hear).’ He proceeded to add that it was ‘the beginning of a new regime; the Lancaster Corporation had managed without lady members but the times had now advanced in many directions and ladies were taking a very important part in public work…. They knew the work done by Mrs Helme on the Education Committee and in other public ways’ [6].  Mrs Helme thanked the Mayor and subsequently she was appointed onto the Health, Marsh, Park and Cemeteries, Storey Institute and Town Hall Committees.

Annie was also the first woman Alderman and then first female Mayor of Lancaster in 1932. She finally retired from the Council in 1949. Further research is required on her role as Mayor and Councillor. However, a letter written by her in 1932 expressing her concerns about ‘the monotonous existence which many of our unemployed men lead’, and setting up a meeting to support a movement that would organise ‘occupation and communal life for the unemployed’ is indicative of her ongoing contribution to the community [7].

the Lancaster Corporation had managed without lady members but the times had now advanced in many directions and ladies were taking a very important part in public work. 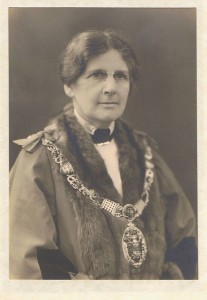 Annie Elizabeth Helme, first female Mayor of Lancaster, 1932-33 (Thanks go to Mrs Helme’s descendants for permission to use this image)

Mrs Helme had a keen interest in education. In 1912 she attended the sod cutting ceremony at Lancaster Girls Grammar School (LGGS), the laying of the foundation stone and subsequently its opening ceremony in 1914, as a member of the Education Committee [8]. She became Chair of Governors at LGGS from 1935 until 1951 and donated an Art Prize Fund.

Annie also contributed widely to the local community by serving on several committees. She was the Chairman of Lancaster’s Health Committee, and was on the Library and Museum Committee. She served on the Lancaster and District and Morecambe and District Employment Sub Committee of the Labour Exchange Advisory Committee. Her interest in health care led her to be a member of the North Lancashire Committee for Mental Welfare and a trustee of Lancaster charities. She was awarded the MBE for her public service.

Annie Elizabeth Helme died in 1963 and her funeral was held at Sulyard Street Wesleyan Chapel. This article can only summarise the pioneering work that Mrs Helme did for the equality of women in municipal affairs and the great contribution that she made to Lancaster and its community.