Lancaster’s Selina Martin was a pioneer in the movement for women’s suffrage who suffered for our political rights. This is her story.

Selina Martin: the Impact of Suffragettes in Lancaster on the National Effort

A Desire for Justice

When Millicent Fawcett founded the National Union of Women’s Suffrage in 1897 it marked the beginning of a movement which captivated both women and men across the country- stretching to those in Lancaster. Although originally a peaceful movement, consisting of those willing to be patient and logical, the desire to be able to vote, when driven by the sheer sexism and injustice of the system, the movement soon led to the founding of the Women’s Social and Political Union by Emmeline Pankhurst in 1903. The Union later became better known as the Suffragettes, who unlike the more peaceful Suffragists, were not willing to wait for the freedom to vote.  Perhaps the reason why the Suffragettes were eventually successful is that the motivation was applicable to women of all social classes and areas. Unsurprisingly, therefore, the Suffragettes appealed to women in Lancaster- namely Selina Martin. 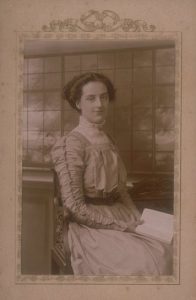 Although born on 21st November 1882 in Ulverston, after the birth of her younger brother Harry when Selina was 4 or 5, the family moved to 31 Windermere Road in Lancaster. Between 1896 and 1901, Selina’s father (John Martin) opened a bookshop on New Street and shortly after they moved to a bigger house on Sun Street. It wasn’t until January 1908 when Selina was 25 that she joined the Women’s Social and Political Union. Either coincidentally, or potentially the reason why Selina joined WSPU, is that at the time, the Prime Minister Herbert Henry Asquith,  attended  a meeting in the Drill Hall on Dallas Road- 500 yards away from her home. At this point it must have all become real to Selina- her city was hosting the Prime Minister- why couldn’t it host the Suffragette movement to? I imagine it was then that Selina realised she had the potential to not only change the way women were viewed in Lancaster, but also nationally.

Hailed as a hero in Lancaster

Over the years that she was a member of the WSPU, Selina was imprisoned on numerous occasions, acquiring a celebrity status in Lancaster. The first time she was arrested was on Tuesday 13th October 1908 along with 36 others when 60,000 people rallied in London’s  Parliament Square and groups of suffragettes attempted to push past police lines. As a result of this, she received a sentence of 1 month in Holloway prison. From her release she was met by a crowd of friends and was driven away in a carriage, drawing attention to her achievements and bravery. On her return to Lancaster the day after her release the Lancaster Guardian printed an article about her, demonstrating her importance as a dissenting figure to admire. She was hailed as a hero in the article which described her as looking pale, but still “militant”, “insisting she was ready to do another term if it was required”. It also portrayed her as sensitive and caring- not at all the violent, tyrant dissenters and suffragettes were thought to be by many at the time. An example of this is that Selina said that ‘if she had not gone to Holloway, her mother would have gone, and she could not bear to lose her or allow her to suffer the ill-effects of imprisonment.’ This also humanised her to those who admired her- it made them realise she was just a normal woman who naturally cares for her mother and family. This may have inspired them to dissent as well- if Selina, a normal woman who started from the bottom, could change British politics, why couldn’t they?

It is due to people like Selina Martin - so close to our home - that women can now vote today.

Not only was Selina active in protest outside of prison but also she was extremely persistent during her time imprisoned. After being arrest on 17th September 1909 when she assaulted a police officer and a citizen in a protest in Birmingham, one of the first things she did in prison was to take off her shoe and use it to smash all the breakable things she could reach as an objection against poor ventilation in the prison. As a result, she had her hands handcuffed behind her back, but as she managed to escape from the first two pairs they used on her, another pair were used which stopped the circulation of blood in her wrists, knocking her unconscious and leaving her wrists in a terrible state. She also used the renowned hunger strike tactic of the suffragettes. Selina said “after three days’ fast” she was “dragged out there with aching arms and shoulders…forced into a chair, tied down”. Then “a swarm of women” and two seemingly untrained doctors were “tearing” at her jaw and “at the same time half suffocating” her by “holding her nose” before inserting the nasal tube. She was released on 2nd November 1909 weak and exhausted- typical of the government-adopted cat and mouse tactic. She described herself as being “so thin” you could “hang clothes on some of the points” she had “developed by fasting in Gaol.’

Suffragettes were not willing to wait for the freedom to vote.

The most publicised action of Selina Martin, which was carried out on 20th December 1909, was when she and Leslie Hall approached prime Minister Asquith as he was leaving his car and asked him of his views on women suffrage. He didn’t answer either of the women, angering Selina into throwing an empty ginger beer bottle into his car and (according to some sources) smashing the windows. They were immediately arrested and after bail was refused, they were taken to Walton Gaol. Despite the fact that they weren’t convicted criminals, both Martin and Hall were treated appallingly, leading to her protesting to the visiting magistrates on her third day in prison. Despite her protest, she was told that the official’s behavior was perfectly reasonable. This gained the attention of Lady Constance Lytton (an upper class suffragette) who had been released from Newcastle prison after only 2 days without being force fed, only 2 months before Selina Martin and Leslie Hall were treated so appallingly. This led Lady Constance to believe that the class prejudiced the officials in prison, resulting in her adoption of a new name and disguise as lower class Jane Warton. When arrested under this name, she was treated just as terribly as Martin and Hall had been. On the revelation of her true identity, she was immediately released, proving the point that the treatment of women in prison depending on their social class.

The triumph of Dissent

It is due to people like Selina Martin- so close to our home- that women can now vote today. The Representation of the People Act in 1928 meant women could vote on the same terms as men (if they were over 21 years old). Selina Martin died in 1972; she lived to witness the result of her bravery and suffering. To conclude, if it wasn’t for the courage shown by the dissenters to start the movement despite the fact that they suffered at the hands of the law and were outcast as criminals, even in cities as small and seemingly insignificant as Lancaster, we may still be living in a gender-inequality society.

REFERENCES & FURTHER READING
All the quotations in this article were found in the following online sources:
Share