Arthur Watts, 1888-1958, was from a Quaker family in Manchester that strongly opposed militarism and conscription. Arthur volunteered at national level on behalf of the Friends Service Committee and abroad as part of the Friends War Victim Relief Service before 1916 and again after the war. On being called up in 1916, however, Arthur took an absolutist stance, refusing to follow orders in the Non-Combatant Corps to which he was initally assigned or accept placement in the Home Office Scheme where he was later sent. He was court martialled twice and served time in prison.

Arthur Watts came from a Quaker family and was educated at the Quaker Ackworth School, near Pontefract. His occupation listed in the census was joiner and carpenter. [1] The 1911 census also provides details of his family: they lived at 107, Upper Brook St., Chorlton on Medlock, Manchester. His father was Challacombe Watts, 1858, born in Canada, a joiner and builder. His mother was Agatha Jackson Watts, 1862, born in Barton, Lancashire. Challacombe and Agatha had been married for 25 years by 1911. Their 7 children were all alive. Only 4 were listed on census, including Arthur who was then aged 23. By 1916, Arthur’s family moved to 4, Queen’s Terrace, Plymouth Grove, Rusholme in Manchester. 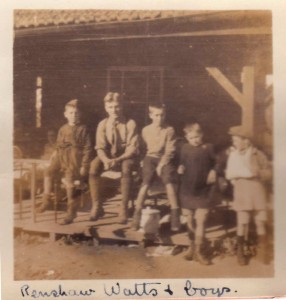 Arthur’s brother, Renshaw Watts, who worked with the FWVRC in France during World War 1. Photograph by Fred Crossley.

Motivation to be a Conscientious Objector

There seem to be many factors shaping Arthur’s conscientous objection, including his faith, Quaker family and schooling. He was a member of both the Fellowship of Reconciliation and the Manchester branch of the No Conscription Fellowship (NCF). [2] His mother, Agatha, was on the local NCF Maintenance Committee which looked after COs, providing finances and accommodation for respite or refuge. Meetings were held at the Watts House. For example, in 1915 the family hosted German classes and from late 1916 a local meeting for NCF women was held weekly. [3] Arthur and his brothers Frank, Renshaw and Ashton were all COs. The other three worked for the Friends War Victims Relief Service (FWVRS). [4] His brother William was too young for conscription.

His mother, Agatha, was on the local NCF Maintenance Committee which looked after COs, providing finances and accommodation for respite or refuge.

It is possible to follow Arthur’s war service and conscientious objection through the records, newspapers and correspondences of the time:

‘If I am successful in regaining my liberty (though I am not over hopeful) I shall probably rejoin the FWVR work unless there seems to be a possibility of my being of some use in educating public opinion a little towards Peace.’

Arthur returned to the Friends Emergency and War Victims Relief Committee after the war, working from January 1920 to March 1923 in famine-hit Russia post-war. On 4 December 1920, the Derby Daily Telegraph reported on the relief work being undertaken in Russia by the FWVRC and the ‘acute suffering in large cities.’ The Nottinghamshire Evening Post also covered the plight of the ‘starving peasants’ in Russia on 2 September 1921 and the work of Arthur Watts and others in providing relief ‘to millions of needy in that country.’

‘Where we feel we have been given a message to utter to the world, we have got to issue that message whether the Censor desires us to do so or not.’