The trials and tribulations of the Lancaster and Morecambe Munitionettes 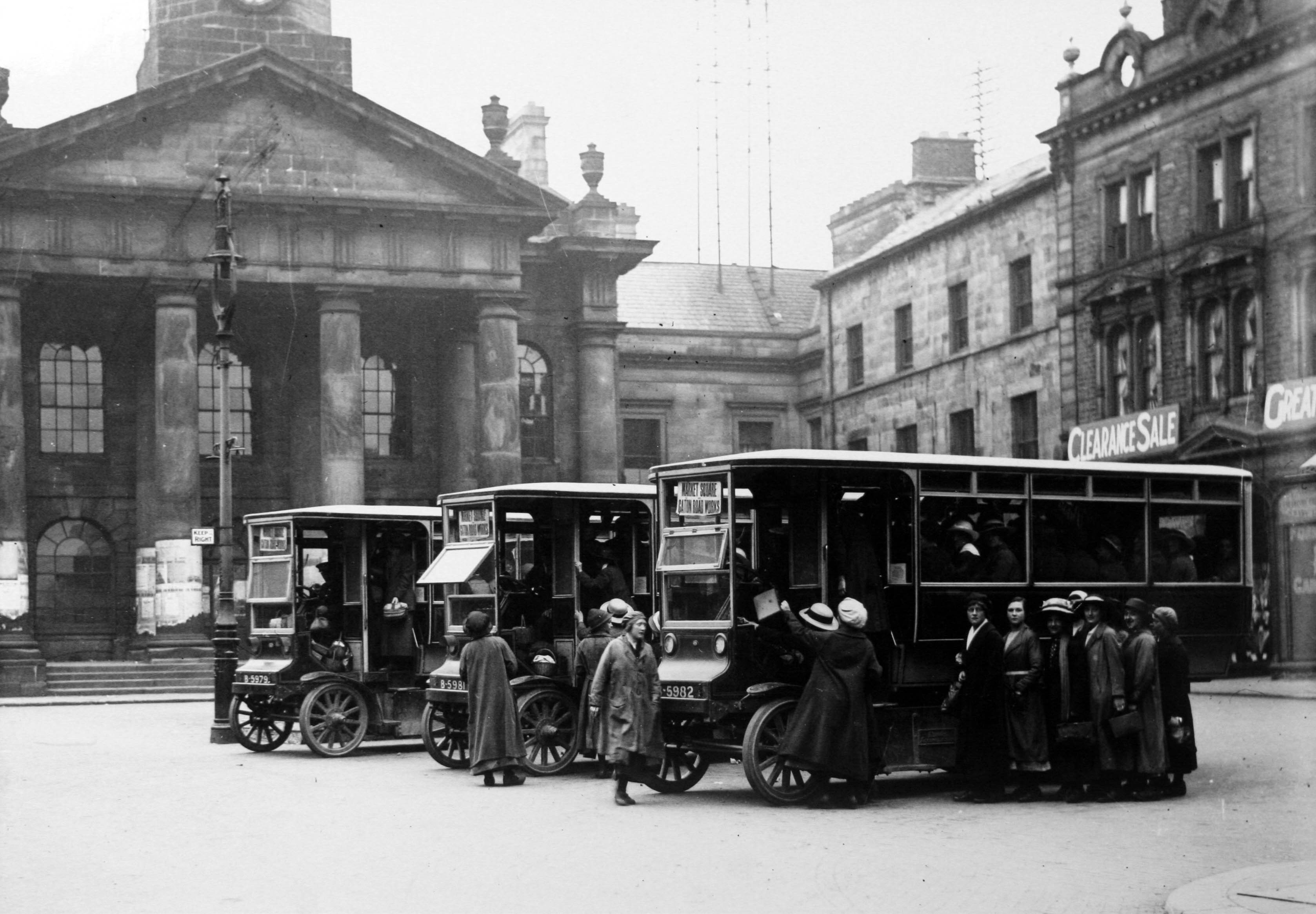 The Munitionette’s life was not easy, with long working hours, often living in a strange town, away from family and friends. Popular history has tended to concentrate on the poor working conditions and the sacrifices made by these women. This article gives an insight into other aspects of their lives in World War 1, through the reports in the Lancaster Guardian of the Munitions Tribunal and other court proceedings.

The trials and tribulations of the Lancaster and Morecambe Munitionettes: danger, death and dissent 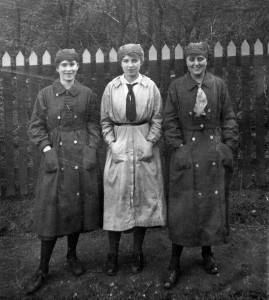 Three ‘Munitionettes’ from the Lancaster or Morecambe munitions factories
Image courtesy of www.kingsownmuseum.com

This special court was convened to deal with issues concerning the two munitions factories: the National Projectile Factory (NPF) in Lancaster and the National Filling Factory (NFF) in Morecambe. Both men and women appeared before the court, which met as required, often weekly, from October 1916 until the end of the war. It focused on a range of issues, with safety of paramount concern. The danger of explosion was very high, as evidenced by the Morecambe White Lund factory explosion of 1917. Of the 156 cases brought before the courts, less than 10% were women. This article focuses on them.

The danger of explosion was ever present and the works police were vigilant, making regular searches of the workers. Four women were charged with having matches/cigarettes on their person in the National Projectile Factory in Lancaster.

Women faced harsh working conditions, including long hours, life-threatening illness and unequal pay, yet their voices of protest were rarely heard, or at least reported.

Munitions Tribunals faced by women working at the NPF, Lancaster

“If you are going to White Lund, then God help you. They are dropping dead every day at the works, and are being carried out.”

The maximum punishment was £100 fine and 6 months’ imprisonment. The Tribunal took into consideration the circumstances of the defendant and whether a message needed to be sent to the other workers to follow the rules. Similar punishments were given to the men.

Working in the munitions factories was a dangerous occupation. Nationally, over 100 women died from TNT and other industrial diseases during the war. (5)

Deaths (male and female) recorded at the NPF, Lancaster and the NFF, Morecambe

The unnamed woman was a friend of Isabella Clarke, a munitions worker at the NFF. They filled 9.2-inch gas shells. The effect of the gas could be discerned by discolouration of the eyes and this was detected in her friend and by the on-site medical staff, just before the Easter holidays of 1916. When Clarke returned from the holiday her friend had died. (12) In Sarah Thompson’s case the Coroner visited the factory as part of his inquest, and was satisfied with the safety procedures, medical checks by a doctor and canteen facilities. These deaths were often not made public, as the government needed to encourage the home front war effort and maintain morale amongst the workers.

There were three fatalities caused by cranes at the Caton Road works. An inquest, in January, 1917, reported on the third fatality: an electrical fitter, William Goodchild, from London, lodging in Morecambe, was accidentally crushed by a crane, driven by a female worker, Sarah McPhail. (13) The fire and explosion at the NFF, White Lund, Morecambe was the worst disaster, as ten men were killed and the factory destroyed.

Women faced harsh working conditions, including long hours, life-threatening illness and unequal pay, yet their voices of protest were rarely heard, or at least reported. There was censorship and local papers tended to report on local soldiers rather than the voices of dissent. Even though women’s wages were not equal to men’s for the same job, the women were earning more than they had done before the war and that may have been one reason why few appeared to protest. Strikes within the munitions industry were rarely reported. 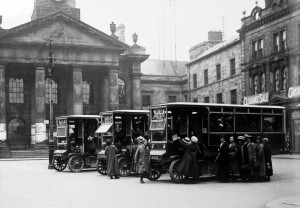 Gertrude Hardman, a 31-year-old widow and munitions worker (probably at the NPF) did speak out about the working conditions. (14) She had been in the local employment exchange when new female recruits arrived for the NFF at White Lund. Hardman talked loudly to one of them, so that all could hear her, saying “You don’t know what you are going to. It’s terrible; girls are fainting every minute; girls are dying every day. They take them out, and nobody knows anything about it.” Hardman was arrested under the Defence of the Realm Act (DORA) and charged with making false statements. Witnesses in court repeated what Hardman had said: “There is a cemetery close by the factory where they bury them,” and “If you are going to White Lund, then God help you. They are dropping dead every day at the works, and are being carried out.” One witness who subsequently worked at White Lund said the stories of girls dying was false. She had never seen one. Another worker denied that girls were dying every day.

This incident can be interpreted as a woman standing up for her rights and being silenced by the government. On the other hand, it could be seen as a woman at the end of her tether who vented her feelings in public. Hardman’s defence in court gave a picture of a respectable war widow, with an eight-year-old son. She explained her actions by saying she had been ill and overtired and that she had been at the exchange on business for her landlady, with no intention of speaking out. It’s quite possible that she said that to avoid a prison sentence. She was fined £5. We will never know what Gertrude Hardman’s intentions were, but this case shows that there were rumours in the area about the harsh working conditions at the factory. It also shows that it was difficult to speak out about such matters.

With a banner carried by Mrs T. Taylor and Nurse Garside of Lancaster, they processed around the town, up North Road, Cheapside and Penny Street, the streets being ‘lined by a large number of townspeople, including many sympathisers’.

Some Munitionettes resorted to crime. Five women were charged with theft in very different circumstances in 1917. Emily Pogson, aged 19 and living away from her home in Darlington for the first time, was tempted on three occasions by her colleague’s possessions, including a raincoat and shoes. She was sentenced to one month’s hard labour. (15) Emily Hodges, from Bolton, stole plates and cutlery from the canteen to provide for her weekend visitors. In her defence, at the Borough Police Court, she said that she could not afford to buy them and intended to return them after the weekend. (16) Kathleen Mulligan, a young Irish woman, stole a box of explosives from her workplace, intending to take them home to show her grandparents the tools that she used. It was perhaps a naïve act, (the newspaper headline was ‘Girl’s Strange Act’), but also dangerous. Mulligan was remanded, outcome unknown. (17)

Rosie Carling worked at the NFF, probably attracted by the relatively high wages, having previously worked in a tobacco factory for 6s a week. However, she was sacked when it was discovered that she was just 15 years old. She stole clothing from her co-workers, with whom she shared lodgings on the seafront at Morecambe, and fled home to Belfast. She was arrested and brought back to Lancaster to stand trial. She admitted her guilt. A schoolmistress from Belfast undertook to escort Carling home if the Bench would set her at liberty. This was agreed and she was bound over for £5 for good behaviour for twelve months. (18) It is not known whether Carling returned to munitions work later.

Three munitions workers found alternative entertainment and a way of making some extra money. Margaret Wilkinson, alias Taylor, was convicted of keeping a brothel at 3 Barratt’s Yard, Brewery Lane, Lancaster. Her sister, Fanny Spandley, and Minnie Martin, a lodger, aided and abetted her. Three men, found on the premises when the house was raided by the police, were also charged with aiding and abetting. The police had the house under surveillance for several days. Each woman was sentenced to two months’ hard labour. The men were fined £10 or 51 days’ hard labour, if they could not pay. (19)

More research is needed on the lives of Munitionettes and the impact that their war work had on them during the war and afterwards.

Munitions factories in Lancaster and Morecambe
How did Lancaster Girls’ Grammar School respond to the war effort during World War 1?
The Women’s Peace Crusade in the North West
Catherine Marshall (1880-1961): Suffragist
Belgian Refugees in Lancaster in World War 1