During World War 1, Belgian refugees came to Britain to escape the conflict at home. One of the refugees was called Irma Daems, who came from Antwerp and attended Lancaster Girls’ Grammar School. In this article, we write about Irma’s experiences and the events that caused so many refugees like her to come to Britain. Read Irma’s own account of her experiences here.

Conflict in Belgium: The Siege of Antwerp

The Siege of Antwerp was a conflict between the offensive Germans and the defensive Belgian, French and British. It began on the 28th September 1914 and ended on the 10th October. The strong defence by the Belgian and French armies and the British Expeditionary Force interrupted the German Schlieffen Plan, which intended to capture Paris before the Russians could mobilise their forces to support the French. (1) Some Belgians managed to escape. About a quarter of a million of these fled to Britain. (2) 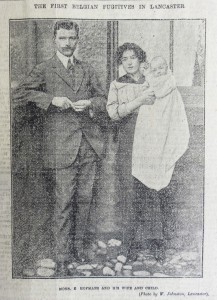 The arrival of a group of Belgians in Lancaster was reported by the Lancaster Observer on 23rd October 1914. It stated that the refugees arrived at the railway station and were taken to a reception at the Town Hall. The majority of these refugees went back to Belgium soon after the war, and were given free passage for a limited time. Most of them did this to help Belgium recover from a devastating siege and war, but some did stay and build another life here. (3) One of the refugees who came to Lancaster was a girl named Irma Daems.

Lancaster Girls’ Grammar School fundraised during the war for Belgian civilians affected by the conflict. For example, on 10th July 1916, the school marked ‘Belgian Day’ by gathering in the school hall to sing national anthems and the headmistress, Miss Phillimore, announced that the school had collected £5 to be sent to Belgian children. (4)

The family went to Ostend station and waited there for 24 hours before managing to get on board a boat going to England. It was very crowded, full of refugees and wounded soldiers. Some people failed to get on and were pushed into the water.

Irma Daems was a Belgian refugee who came to England with her family (her parents and 4 and 8 year-old brothers) when the fighting moved to her home city of Antwerp. Once settled in England, she lived on Balmoral Road in Morecambe and attended Lancaster Girls’ Grammar School. Irma wrote her account of her journey from Belgium to England in the 1917 edition of the school magazine, The Chronicle. (5) Read Irma’s own account of her experiences.

Irma Daem’s account of her ‘Flight to England’ in the LGGS Chronicle, 1917. Courtesy of Lancaster Girls’ Grammar School

Irma begins her account by describing how, in the early weeks of the First World War, many of Belgium’s cities and ‘nice places’ were destroyed. Her home city of Antwerp was spared initially and many refugees from the war-torn cities fled there for safety, as it was believed the Germans would not capture it for six months. British soldiers went to help defend Antwerp and Irma and her family thought they were safe. However, two days later, a newspaper announced that those who wanted to leave should go and any others had to prepare their cellars as the Germans were going to bombard the city. Irma’s family had already prepared their cellar ‘because of the Zeppelins which came over the city nearly every night’ but now they also began to make ‘bundles’ – getting ready for leaving Antwerp.

Irma and her family did not leave right away as they saw others sitting with their luggage in the streets, unable to get away. They therefore returned home and Irma writes ‘We were so glad to be at home again, and we hoped to be able to stay there,’ but at midnight the bombardment began and they ‘had to fly.’ Two days before, the family had awoken at half past three in the morning at the sound of gunfire – the fighting was getting closer. Irma recalled ‘Many bombs dropped that night, but they all dropped in the fields, so that not that much damage was done.’ That same day they witnessed an air fight between Belgian, French and German aeroplanes. As they left, a bomb dropped on the cemetery, five minutes away from their house.

‘The English people have always been very kind to us, and I am sure we shall never forget what they have done for us, and remember them always when we get back to our home country, when the war is over, which we wish to be very soon.’

In the ‘pitch dark,’ along with other inhabitants of Antwerp, Irma and her family left, crossing over a river on a ‘bridge of boats with wood across’ made by Belgian soldiers, and then walking for eight hours with the noise of the bombardment behind them. After two hours of walking, when they looked back they could see ‘nothing but flames.’ Irma writes: ‘All the way there were people in flight. It was terrible to see how they had to fly with the old and sick people who were not able to walk.’ They walked to St. Nicholas and there caught what they were told was the last train leaving. It was packed with refugees, all escaping the conflict. On the train Irma and her family travelled past places such as Lokeren and Ghent, before arriving in Ostend at about six o’clock. They stayed there in a small room with eleven other people for five days. It was so cramped they had to sleep on the floor.

The family went to Ostend station and waited there for 24 hours before managing to get on board a boat going to England. It was very crowded, full of refugees and wounded soldiers. Some people failed to get on and were pushed into the water. Six hours later Irma and her family landed at Folkestone in England, where they waited for two hours, being fed by the English people there, before getting on a train to London. Along with many other refugees they were taken to Alexandra Palace, where they stayed for two days before going to Manchester for a night and next travelling to St. Anne’s (near Blackpool in Lancashire) with 85 other Belgians. Finally, Irma writes that some men chose sixteen Belgians to go to Morecambe, which included her family, and they took them to their house on Balmoral Road where they would stay for the duration of the war.

Irma expresses her gratitude to the British people who had offered her shelter and safety, saying ‘The English people have always been very kind to us, and I am sure we shall never forget what they have done for us, and remember them always when we get back to our home country, when the war is over, which we wish to be very soon.

It was really interesting for us to read Irma’s story. The current refugee crisis can seem very far away and we didn’t know that people back then came here to Lancaster, for shelter. It’s humbling to hear a story of a refugee and it makes you think about the current crisis as being much less about numbers and more about real people.

It’s humbling to hear a story of a refugee and it makes you think about the current crisis as being much less about numbers and more about real people.