Caroline Marshall is not as well-known as her daughter, Catherine Marshall, a prominent suffragist and pacifist. Yet Caroline was an active suffragist, who founded the Keswick branch of the National Union of Women’s Suffrage Societies and supported women’s suffrage in Cumberland. In the First World War she also promoted pacifism, supporting the No Conscription Fellowship and the Women’s International League, a women’s peace movement founded in 1915.

Caroline Marshall, née Colbeck, was comfortably middle class. She was a teacher at a small school with her sister and sister-in-law when she married Frank Marshall in 1876. (1) He was a Mathematics teacher at Harrow School. They had two children, Catherine born in 1880, and Henry, born in 1883. (2) Caroline was politically active and, with her daughter, joined the Women’s Liberal Association at Harrow, Caroline being the first President and Catherine the first Secretary. They joined the same association when the family moved to Hawse End, Keswick, in 1904, on her husband’s retirement, (3) and were involved in the suffrage movement from 1908-14, founding the Keswick Suffrage Society (KWSA) in 1908. 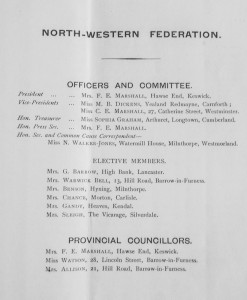 On the outbreak of war the national suffragist movement decided that they would cease their campaign and contribute to the war effort. The local societies continued, but varied in their contributions as a group to the war effort, many women joining local or national relief schemes. Caroline was still the Honorary Secretary of the Keswick Society of the National Union of Women’s Suffrage Societies (NUWSS) in 1916, (4) and both she and her husband, Frank, continued to run the KWSA. The north western suffrage societies had formed a federation and Caroline Marshall was both President and Hon. Press Secretary of this group of 17 local societies from June 1916. (5)

“I am sorry to say I see no sign of the least support of C.O.s among our sort.”

The correspondence in the Marshall papers gives tantalising evidence of Caroline’s work. (6) In May 1915, Frank Marshall wrote that he had made 97 visits to members of the Keswick NUWSS (for reasons unknown). It may have been connected to the Florence Nightingale Lamp Day collection, instigated by the Keswick suffragists and where Caroline was one of several women collecting for the British Women’s Hospital. The following year (in July 1916), he had collected 47 signatures, six times the number of people he asked. Frank was “sure that many would like to sign whose husbands and circumstances will not let them.” (7) It is not known what the signatures were collected for. Sphagnum moss was required for hospital dressings and in August 1916, Caroline had organised a group of 18 to go and collect the moss. (8) By October, Frank wrote to his daughter that “Mother’s parties have gathered much sphagnum, and she is very busy getting it dried in the empty rooms at Hawse End.” (9)

By 1918 the suffragists, in general, were thinking ahead to the post-war world and women having the vote. The Marshall family, as committee members of the KWSS, organised meetings in 1918 to discuss the future of women and the vote. Caroline’s notes from the conference called by KWSA on May 2nd included plans to hold a meeting, open to all interested parties, on May 16th to discuss ‘The Responsibilities of the Woman Voter,’ with a short talk by Catherine Marshall on “What the possession of the Parliamentary vote means,” as well as a speaker prepared to answer questions on registration, qualifications etc. to vote. The notes also stated that a Citizens’ Association for both men and women would be proposed, though they were not sure that the KWSA would join immediately and may stay independent. They were clearly looking forward to some women having the vote, with the KWSA intending to help canvass for voter registration. (10)

Fawcett, wishing to support the war effort, moved in line with the Women’s Social and Political Union (WSPU) members, led by Emmeline and Christabel Pankhurst, burying their differences and becoming ultra-patriots. Women who had been prominent on the Organising Committee of the NUWSS, including Catherine Marshall, became involved in the international women’s movement and worked for peace. (11) Catherine Marshall was a key member of the No Conscription Fellowship (NCF) and the Women’s International League (WIL) and she was supported by both Caroline and Frank, who believed in pacifism. Both parents wrote regularly to their daughter, encouraging her mentally and financially.

Despite opposition, both Caroline and Frank supported the conscientious objectors (COs) in Cumberland. Frank wrote to his daughter in August 1916 and commented: “This war panic has bred such cowardice and dishonesty as I had not dreamed of. No-one dares think and talk from their own minds, they huddle together in a panic driven flock before the military. We find no sympathisers here. Mother [Caroline] has tried hard, I very little but with no success” (12). Caroline, too, commented that “I am sorry to say I see no sign of the least support of C.O.s among our sort.” (13) This did not deter them. In October the Marshalls proposed to send £2 a month for 12 months for the dependents of COs and £3 3s to the NCF as a one-off payment. The money came from “considerable war profits” from one of their investments, most of which was being given away. (14) In 1917 Caroline sent £10 to the Peace Registration Fund. (15)

As a paid-up member of the Women’s International League, Caroline was actively writing to people in November 1917 in response to a notice from the WIL, after a speech in Parliament about women’s suffrage.

There are no known records of the Suffrage Society. However, their activities are noted at various events in the years up to the war. One of the earliest mention of a Suffragist is in September 1912, when the Women’s Liberal Association of Lancaster was addressed by Mrs Bliss of Boarbank Hall, Grange over Sands [4]. She was described as ‘not a Suffragette but a Suffragist’. The focus of her talk was her concern with women’s lack of interest in politics. It was reported that Mrs Bliss believed that the Suffragettes had delayed the vote. It is interesting to note that although the WLA had 1200 women enrolled as members in North Lonsdale, the Lancaster Division had 231 and only 80 of these were in Lancaster [5].

The main event in Suffragist terms was the Non-Militant Suffragist March to London in June 1913, which passed through Lancaster. The marchers had received a warm welcome in Carnforth. They marched to Lancaster, where they arrived in the late afternoon. With a banner carried by Mrs T. Taylor and Nurse Garside of Lancaster, they processed around the town, up North Road, Cheapside and Penny Street, the streets being ‘lined by a large number of townspeople, including many sympathisers’ [6]. The marchers had tea at Springfield Hall, the home of Sir Norval Helme, M.P. In the evening, a meeting was held in the Ashton Hall, where they were addressed by Miss Matters [7] and Sir N. Helme. The newspaper said that some ladies wore their red, green and white sashes and literature was distributed.

Although the Suffragists were not politically aligned, the group in Lancaster had members such as Annie Helme, who were associated with the Liberals, who did address the issue of suffrage. The Lancaster Branch of the League of Young Liberals held a meeting in the Reform Club Reading Room and debated women’s suffrage [8]. The all-male audience held differing views. The Chairman, Mr Arthur Wilson, said he favoured an extension of suffrage but that the recent conduct of the militant suffragettes rather made him pause. Mr W. Garth was not in favour. Sir Norval Helme M.P. voted in favour of the second reading of the 1913 Women’s Suffrage Bill.

“Only we must be balanced. Believe that things are working out on a bigger scale than we can grasp or tackle – I mean our work must be done according to our strength, not in defiance of all laws of health and social existence.” 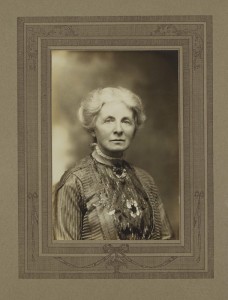 Practical as well as financial help was given. In October 1916 Caroline took in William Hayes, a CO on furlough: “A pitiful case, I fear, but he is awfully happy ‘Knocking about’…” This was despite her husband being away from home at the time. Hayes may only have stayed a week and possibly moved to Barrow House, a property on the other side of Derwentwater, as Caroline had family visiting soon. This may therefore have been a one-off – we don’t know. (16) The family carried on their work, but it seems to have been an uphill struggle. In June 1917, Frank wrote to his daughter, commenting that COs seemed to be treated as bad as or worse than ever. They entertained many people during the war years, some supporters of their ideas, some not. In 1917, Frank described how “We dipped Uncle Willy into pacifism a bit, and now Aunt Ellen is soaking in it. I think it amuses her more than it panics her.” (17)

Caroline was also a member of the Women’s International League. In 1917-18 she paid £1 10s subscription plus a donation of £20. (18) As a paid-up member of the Women’s International League, Caroline was actively writing to people in November 1917 in response to a notice from the WIL, after a speech in Parliament about women’s suffrage. She even had a copy of Hansard to show people. On July 15th 1918, Frank wrote that he and Caroline were longing to hear via the newspapers reports about the WIL’s pacifist demonstration in Hyde Park that had taken place the previous day. (19)

Caroline and Frank were also politically involved with the Independent Labour Party (ILP), a party known for its anti-war views. They entertained 40 members of the ILP to tea in July 1916 and seemed to approve of their views, although there is no evidence they were members themselves.

Caroline gave advice to her daughter in her letters, often trying to ground Catherine, who tended to overdo it. In September 1916, she spoke of a Home Office Scheme: “Only we must be balanced. Believe that things are working out on a bigger scale than we can grasp or tackle – I mean our work must be done according to our strength, not in defiance of all laws of health and social existence.” (20) It was a philosophy that helped her to get through the war as well as support others.

One can only imagine Caroline’s feelings when she cast her vote in the 1918 election for the first time. She had worked, like many other women, with both those who supported the war effort and those who had campaigned for peace. Caroline was widowed in 1922 and died in 1927.