Emanuel Nunes Ribeiro of Salford, Manchester, was conscripted. He was denied exemption from military service by a tribunal. Ribeiro was an absolutist and refused to co-operate with conscription or to do work of national importance. Rather than be forced to fight he went on hunger strike. He maintained this for over a year, being force fed 155 times against his will in Warrington and Wormwood Scrubs. His treatment led to articles in national newspapers, questions asked in the House of Commons by MPs and a petition to Lloyd George. Gail Capstick outlines Emanuel Ribeiro’s treatment in the years 1917-1918 and, from a letter he wrote to his wife, gives a first hand account of his experience of his treatment.

Emanuel Ribeiro was a gold and silver engraver and father of five children. He was arrested on 17th January 1917 for failing to join the army or do work of national importance. He was fined four shillings at Salford Police Court, handed over to the military authorities and taken to Bury Barracks where he began a hunger strike. Force feeding started on January 24th 1917 and on 25th January he was transferred to the Lord Derby War Hospital at Winwick, near Warrington where there was another conscientious objector, Private John Burke of Morecambe. Whilst at the hospital Ribeiro and Burke were force fed by a tube. This treatment, previously been meted out to suffragettes, had been controversial and in the case of William Edward Burns led to his death in 1918. Little more is known about John Burke other than he was later sent to No. 1 Special King George’s Hospital in Dublin ‘in a state of collapse’ after nearly twelve months of force feeding. [1] 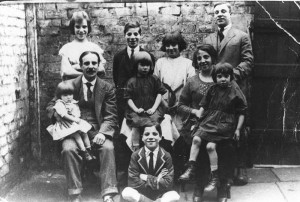 A transcript of a letter from Ribeiro to his wife received on 15th March 1917 outlines his treatment:

‘I wish you first to know what transpired up to 5 o’clock Wednesday. Tuesday morning I resist with all my strength also Monday evening previous. On Tuesday afternoon they change the method, they force a gag into my mouth which causes terrible punishment, then a tube was put in the mouth and forced into the stomach…. with six men holding me down from moving. On Tuesday evening I was out of bed…. I resist and after falling on the ground, they with all hands holding me on the ground forcibly fed me there. This I say is scandalous. It is not only inhuman but barbarous torture of the worst kind. On Wednesday morning I was gagged and forcibly fed with great pain…. also when I have gone out of the room I am continually dragged back and thrown like a dog into the room and the door is held for some time until I get into bed.’ [2]

The treatment of Ribeiro was the subject of controversy and his plight a cause of concern taken up by leading campaigners and MPs during the period of his incarceration. Lady Constance Lytton asked Ribeiro’s wife, Bella, to be allowed to use his letter to her.

On March 20th 1917, Sir William Byles, Liberal MP for Salford North and himself a pacifist, asked the Under Secretary of State for War:

‘whether Emanuel Ribeiro is still confined to the Lord Derby’s War Hospital near Warrington for conscience’ sake; whether he is still being forcibly fed; whether he is in solitary confinement in a very cold bedroom and has to stay in bed all day to keep warm; is denied the visits of friends and not allowed to leave his room even to go the lavatory; whether he has a wife and five young children at home and whether, under the Military Service Act he is entitled to complete exemption?’

Mr Macpherson replied that Ribiero was still in the hospital:

‘being forcibly fed and occasionally forcibly washed and that the room was not cold. He stays in bed because he will not get up. He is allowed visits from his wife. He has no exemption from combatant service on conscientious grounds.’ [3]

On Tuesday afternoon they change the method, they force a gag into my mouth which causes terrible punishment, then a tube was put in the mouth and forced into the stomach…. with six men holding me down from moving.

On June 20th 1917 Byles again asked the Under Secretary of State for War:

‘whether he is aware that a Conscientious Objector named Emanuel Ribiero now of 7.8.E Ward, Lord Derby’s War Hospital, Winwick, Warrington, was arrested five weeks ago and handed over to the Military; that he went on hunger strike and was seven days without food or drink at Bury Barracks; whether in view of the danger involved in his treatment he proposes to take action in the matter.’

The response from Macpherson was that:

‘Ribeiro is still in the Lord Derby War Hospital. He is hunger-striking, and is being fed by tube. He makes no resistance, so that his feeding cannot be described as forcible. He is still confined to a large two-bedded ward, and is allowed visits from his wife and pastor. His weight is maintained, and I am told that his present condition is good. There is not restriction to his correspondence, but it is necessarily censored. Ribeiro has been in this hospital since 25th January, 1917, and has been treated under the same conditions from that date. In regard to the last part of the question, I would point out that the tribunal apparently did not share my hon. Friend’s views as to this man’s title to exemption from military service.’

Mr Macpherson stated that it was not for the Government to decide but for the tribunal and that ‘The tribunal decided he ought not to be exempt.’ [4]

Ribeiro was visited by the Primitive Methodist Visitor of the Sick after five months who said his health was deteriorating. His wife, pregnant and with other children to look after, had no means of financial support other than from the Methodists. On 15th and 24th May the Visitor of the Sick wrote to the War Office, appealing for his release. On 21st June, the Labour MP Phillip Snowden MP for Blackburn who had campaigned asked conscription asked House of Commons asking why the Minister for the Sick had received no reply. [5]

On 15th October Ribeiro was seen by Lady Emily Lutyens who considered his case to be serious. 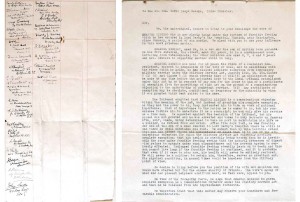 A petition was drafted to Prime Minister, David Lloyd George, giving relevant details of Ribeiro’s situation and stating that:

‘We, the undersigned, desire to bring to your knowledge the case of EMANUEL RIBEIRO who is now slowly dying under the torture of forcible feeding which he has endured in Lord Derby’s Hospital, Winwick, near Warrington, since January, a period of sixth months. We plead with you to use your influence in this most grievous matter….

In view of the foregoing facts, we urge that EMANUEL RIBEIRO be given complete exemption as a Conscientious Objector under the Military Service Act and that he be released from his imprisonment forthwith.

We therefore trust that this matter may receive your immediate and favourable consideration.’ [6]

The signatories to the petition are indicative of the high profile of Ribeiro’s case and the support from leading pacifists. They include: George Lansbury, editor of the Daily Herald which took a strong pacifist stance, and who was later to become leader of the Labour Party from 1932-1935; Bertrand Russell, himself a conscientious objector; Catherine Marshall, significant campaigner and Honourable Secretary for the No-Conscription Fellowship.

In March 1918 Ribeiro was court martialled, sentenced to two years’ hard labour and sent to Wormwood Scrubs prison. He was released on health grounds on 1st May 1918, weighing only 7 stones, having survived his ordeal.

He was released on health grounds on 1st May 1918, weighing only 7 stones, having survived his ordeal.

After the war Ribeiro and his wife had a greengrocer’s shop in Manchester. Photographs of his wife standing outside the shop and photographs of Ribeiro, his wife and children are in the Jewish Museum in Manchester. He died on December 21st 1953. His wife had divorced him and he remarried Mary M. Delaney (Maureen) in 1953 who is mentioned on his gravestone. He is buried in the Spanish and Portuguese section of the Urmston Jewish Cemetery. [7]

A hundred years after the outbreak of World War 1 there was an honouring of First World War conscientious objectors, with descendants taking part in the International Conscientious Objectors Day commemoration in Tavistock Square, London WCI on Thursday 15th May 2014. Emanuel Nunes Ribeiro was one of those who was commemorated. [8]