Was Abbot John Paslew loyal to his Catholic faith, or was his dissent based on self-interest? Rebecca Maddox explores this question with reference to the Pilgrimage of Grace – the largest peacetime rebellion against an English monarch.

To what extent can Abbot John Paslew now be deemed an admirable dissenter?

The Act of Supremacy and the criminalisation of Catholics

The English Reformation that began in the reign of King Henry VIII had far reaching consequences. England broke away from the Roman Catholic Church based in Rome and Henry was made Supreme Head of the Church of England by an Act of Parliament in 1534. The Act of Supremacy of 1534 declared the English Crown to be the Supreme Head of the Church in England in place of the pope. Any act of allegiance to the latter was considered treasonous dissent because the papacy claimed authority over its followers, superior to the authority of any monarch. It was under this Act that Lord Chancellor to Henry VIII, Thomas More, and Cardinal John Fisher were executed and became martyrs to the Catholic faith. As well as these two notorious men, Henry VIII is estimated to have executed between 57,000 and 7­2,000 people during his almost 38-year reign, many of whom died for remaining loyal to their Catholic faith.

The Pilgrimage of Grace (a popular uprising in protest to Henry’s split from the Catholic Church and the subsequent dissolution of the monasteries) was lead by Robert Aske, a lawyer in 1536. Aske, along with several thousands of others, marched to London in what was ‘the largest peacetime rebellion raised against an English monarch’ (Lipscomb, 2009) and has been deemed ‘the most serious of all Tudor rebellions’ (Cross, 2013). Henry promised to look into the complaints of the rebels and many of the protesters were satisfied with this. However, their complaints were never looked into and Aske, along with several others of the leaders, were arrested for treason and executed. Aske was forced to hang from a church tower in chains until he died of starvation.

The idealism of Dissent

The area of Catholicism interested me. As a Catholic myself, the plight of the brave individuals who were willing to die rather than convert to an alternate faith, choosing death over what they perceived to be eternal damnation of their souls if they were to deny this faith, is something that I have always seen as commendable. It also seems like a dissent that is completely justifiable- if you are living at a time when no one doubts the existence of Heaven and Hell, the fact that Henry VIII executed people for maintaining the beliefs that they held to be true and holy (as depicted by their Catholic faith) seems completely unfair. I have an interest and have read books concerning the way in the way in which Mary Tudor refused to acknowledge her father as the Supreme Head of the Church of England for two years, despite the risk that this placed her under, so learning about less notorious individuals who were inclined to do the same has also been interesting.

John Paslew, the last abbot of Whalley Abbey - tried and executed at Lancaster for high treason in 1537.

Tudor history is also my area of historical interest and the way in which Catholic dissenters played such a huge role in Tudor history meant that this area accommodates areas of my existing knowledge and interest. Research into this group of dissenters (e.g. the Catholics involved in the Pilgrimage of Grace) was also the way in which I can to appreciate the importance of their cause. The vast amount of wealth from the Dissolution of the Monasteries went to King Henry VIII- whilst Anne Boleyn is noted to have desired that the funds go towards education or charitable purposes, Henry (and Thomas Cromwell, trying to please the King and raise his own position), were merely focused upon increasing Henry’s wealth. Here, then, the cause of these dissenters seems wholly justified- they were attempting to prevent the Dissolution of the Monasteries; the destruction of their place of worship, etc. at the hands of a greedy king. Also, the way in which many Catholic dissenters were persecuted for remaining loyal to the Pope (and Katherine of Aragon) has also greatly interested me. For example, the way in which Cardinal John Fisher became the Queen’s chief supporter and counsellor, defending her completely against Henry, stating that he was willing to die rather than declare that the marriage between Henry VIII and Katherine could rightfully be dissolved, seems incredibly noble.

John Paslew, the last abbot of Whalley Abbey was caught up in the Pilgrimage of Grace, and was tried and executed at Lancaster for high treason in 1537. His remains were returned to the abbey to be hung in chains. Dispute surrounds Paslew; whilst many in the Catholic Church reveres him as a martyr, historians are more inclined to see him in a less favourable light. One must note that in late Tudor times Whalley Abbey enjoyed relative prosperity and spent an extravagant two-thirds of its annual income on purchasing various foods and drink. Paslew himself was also responsible for the commissioning of a separate mansion, east of the great cloister. He also reconstructed his own lodgings and added a Lady Chapel. Such behaviour hardly aligns with what one would assume a Catholic abbot would believe when one looks to the Bible: (Luke 12:15 – And he said unto them, Take heed, and beware of covetousness: for a man’s life consisteth not in the abundance of the things which he possesseth.), leading to some historians claiming that Paslew’s dishonest behaviour means that despite his position as a martyr to the Catholic faith, the ability to deem him admirable is limited. Furthering this is the fact that Paslew was accused of having sold much of the plate of Whalley Abbey to pay the cost of gaining a jewelled mitre (the liturgical headdress of a bishop or abbot). He also pursued tithes and fees more aggressively in order to pay for all his costs. A comparison of its accounts for the years 1478 and 1521 shows a large increase of expenditure, especially in the items of meat and drink. Here then, again, Paslew’s behaviour (or the behaviour within his abbey) seems to be the behaviour of the monks that Henry VIII had so bitterly condemned and used as a scapegoat for his Dissolution of the Monasteries- the type of monk that did not help the community as they were meant to do. All that these monks appeared to do was take money from the poor (e.g. Baptisms had to be paid for, as did burial spots in holy ground) despite the fact that many of these monasteries were huge and owned vast areas of land. This behavior occurred regardless of the fact that the Bible states, “It is easier for a camel to go through the eye of a needle than for a rich man to enter the Kingdom of God” (Matthew 10:25), suggesting that the behavior of Whalley was of a sinful abbot rather than a brave dissenter, fully committed to his faith.

Whalley Abbey spent an extravagant two-thirds of its annual income on purchasing various foods and drink. 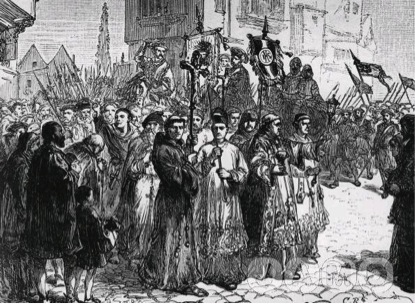 Etching of the Pilgrimage of Grace

Involvement in the Pilgrimage of Grace

Whilst some may praise his bravery in dissenting and in defending his religion against Henry VIII in the Pilgrimage of Grace, one must note that evidence suggests that Paslew was an unenthusiastic follower of the rebellion. Nicholas Tempest, one of the Yorkshire leaders of the rising, came to Whalley with 400 men and Paslew is alleged to have lent Tempest a horse and some plate. However, one must note that Aske said he had no money from the abbot as he had from other abbots and priors. It seems that Paslew was reluctant to join the movement. This is further suggested by the fact that Whalley paid a grant by the convent of a rent of £6 13s. 4d. to Cromwell on 1 January, 1537. Here, Paslew is seen to be attempting to please and submit to, rather than rise against, the government as a true dissenter would be presumed to do. It must be noted also that when the rebels approached Whalley, the abbey put up a brief resistance before opening its gates to the rebels. Here then, Paslew is not depicted as the unfaltering defender of the Catholic faith, which some Catholics in the past may have desired him to be viewed as. Furthering this view is the fact that Paslew was summoned by the rebel leadership to conferences at York and Pontefract, but did not attend, and seems to have taken no further part in the rebellion, showing his lack of desire to dissent, although it is for dissent that he would eventually be executed.

Faith at the end?

Although participating very minimally (and arguably unwillingly) in the Pilgrimage of Grace, one cannot deny the admirable defence of his Catholic faith when it came down to it, as Paslew refused to take the compulsory oath of allegiance to Henry VIII and was executed, with two of his fellow monks, at Lancaster in March 1537. Here, when directly ordered, Paslew finally truly and admirably dissented- he refused to accept Henry as the Supreme Head of Church of England and thus stayed loyal to his faith and the pope. Despite all his faults, he dissented and died faithful to his religion.

Paslew refused to take the compulsory oath of allegiance to the king.