From 1916 until the end of the war a growing group of women, many of whom had been active in the suffrage movement, began to promote peace through the Independent Labour Party (ILP). They travelled around the North West addressing meetings in the open air and in ILP halls. This article draws on the experiences of two of those women: Annot Robinson and Muriel Wallhead. 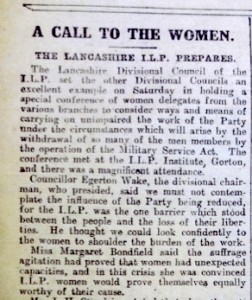 At the outbreak of war a small vocal group of North West women, previously involved in the suffrage movement, took up the role of propagandists for peace through the Independent Labour Party (ILP). (1) On Saturday, 27 May 1916 the Lancashire ILP called a conference of women members to decide how the influence of the ILP as a peace organisation could be maintained when the men were imprisoned as conscientious objectors. As a result of the discussions seven suggestions were made. Significant were 4 and 7:

4. Speakers’ classes for women should be formed.

7. Women members should organise themselves to distribute Peace literature, to secure signatures for the Peace Memorial, to conduct a Peace agitation and, at the right time, to arrange women’s Peace processions.’ (2)

Based in Manchester, Annot Robinson and Muriel Wallhead were already amongst the most active speakers and campaigners.

‘Women members should organise themselves to distribute Peace Literature, to secure signatures for the Peace memorial, to conduct Peace agitation, and at the right time, to arrange women’s Peace processions.’

As a pacifist, Annot resigned the suffragette movement, convinced that the nations fighting each other should lay down their arms and arrange peace. She was a founder member of the Women’s International League for Peace and Freedom (WILPF), whose purpose was to get women in the nations at war to put pressure on their governments to work for peace. The government prevented her from attending their first conference at The Hague in 1915 but she signed the open letter to the women of Austria and Germany that Christmas, imploring that ‘all urge that peace be made with appeal to wisdom and reason’. (3) 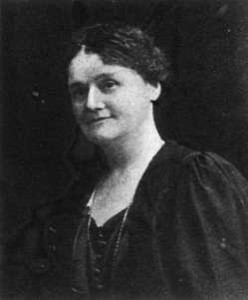 Throughout 1916/17/18 in Manchester Annot addressed open-air meetings in Tib Street on Sunday afternoons, billed as propagandist meetings. A report of one such meeting addressing ‘War Problems’ states that ‘a large crowd attended and listened with fine attention.’ (4) She spoke at meetings in the Clarion Café, Caxton Hall and Beech Mount in Salford. She also took her message to other branches of the ILP in Liverpool, Nelson and the Burnley Women’s Peace Crusade. (5) Sometimes her talks took the form of a lantern lecture. (6)

Meetings were often large: in Burnley she addressed an audience of 500 ‘warm and appreciative women’ in the Co-op Hall. (7) Her talks – ‘The Price of War’, ‘Things As they Are,’ ‘Women and Munitions’ and ‘Equal Pay for Equal Work’ – linked the peace message to the social problems the war was causing on the home front and which were so close to her heart, such as improving the conditions of women munitions workers.

As a pacifist, Annot resigned the suffragette movement, convinced that the nations fighting each other should lay down their arms and arrange peace.

Muriel was brought up in a family that had been involved in the development of the ILP in Manchester so it is no surprise that she became an ardent advocate for peace. (9)

The first record of Muriel speaking is advertised in the Labour Leader where she is billed to speak to Glasgow ILP on Sunday 12 March 1916. (10) The report of her talk to an audience of more than 100 in Leigh that year records that ‘Miss Wallhead dealt forcefully with the necessity for immediately initiating overtures towards peace. Her treatment of the subjects of food prices and the conscription of capitol was received with much sympathy. The usual interruptions of a few irresponsibles rising for a moment to a little storm were subdued in an admirable manner by the speaker.’ (11) 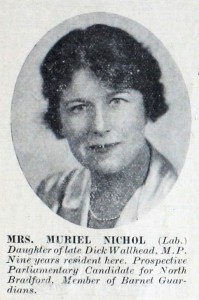 In 1917 Muriel spoke in Manchester and West Bromwich to open-air meetings and in July she spent a weekend in Rochdale. August finds her in Barrow-in-Furness, addressing a meeting to which women were especially invited (12). In September she was in Liverpool, twice addressing meetings in Toxteth, Old Swan, West Toxteth and Kensington on ‘Peace’. Her second visit is said to have provided ‘A fine meeting and plenty of good humoured opposition.’ (13) September finds her also in Southport, on the sands, speaking on ‘The Futility of War’ and described as ‘A splendid address and when question time came the opposing party could do no more than howl.’ (14)

In January 1918, when her father was arrested and imprisoned, Muriel took over his speaking engagements. (15) Her father, brother and fiancé were all in prison.

‘Miss Wallhead dealt forcefully with the necessity for immediately initiating overtures towards peace. Her treatment of the subjects of food prices and the conscription of capitol was received with much sympathy.’

During 1917, other Manchester ILP women speakers joined Annot and Muriel on the speaking circuit. Mrs Agatha Watts spoke in Manchester, Salford, Oldham and Liverpool, (16) and Miss E. Wilkinson in Manchester and Salford, including the open-air meetings in Tib Street. (17) Mrs Swanick told a crowd in Manchester that ‘the point of paramount importance was an early peace’ and Mrs Cooper of Nelson ILP spoke at a ‘splendid meeting’ in Great Harwood. (18) So did the speaking classes encourage women?

What happened to Annot and Muriel when peace was declared?

Annot’s unhappy marriage to Sam Robinson, a utopian socialist and alcoholic, ended when the couple separated towards the end of the war. She stood unsuccessfully twice for Manchester City Council. The WILPF employed her as an organiser and she travelled in Britain, USA and Holland on its behalf, until in 1922 when a lack of money to pay her precipitated a return to teaching in Scotland. She died suddenly during an operation in Perth Royal Infirmary in 1925. (19)

Muriel married her conscientious objector husband, James Nichol, in 1920. (20) She had one son, born in 1922 in Bradford, where she stood unsuccessfully for Parliament in 1935. Moving to Welwyn Garden City, Muriel served as the chair of the Urban District Council from 1937 – 1945. She entered Parliament in 1945 as the MP for Bradford, losing her seat in 1950 due to boundary changes. Her unsuccessful attempt to gain a seat in 1955 for Bradford North marked her retirement from politics. (21)