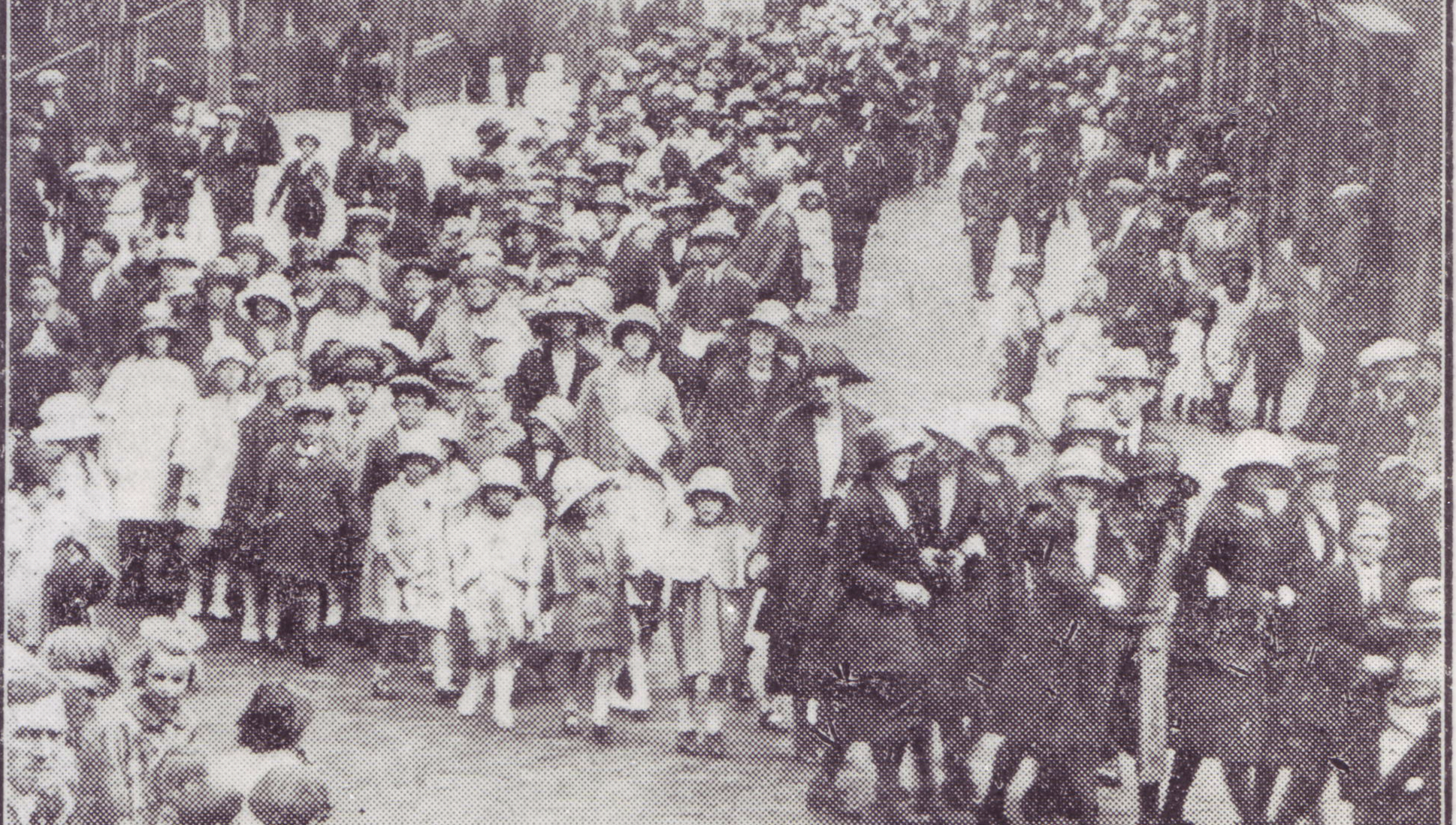 The women’s peace movement was at its strongest in the years following the First World War. Building on their experience of working for peace before and during the war, the 1920s saw a period of peace activity locally, nationally and internationally. Many of the peace campaigns in this period depended on women for their success. They worked through women-only groups on such demonstrations as the Women’s Peace Crusade and Peace Pilgrimage and with mixed-sex organisations on the No More War demonstrations which took place throughout the 1920s across the country, including in Lancaster, and which were a popular expression of the desire for peace.

The immediate aftermath of war

In the years following the armistice in 1918 the women’s peace movement re-aligned itself to capitalise on the huge support that the movement for peace had in the 1920s. A number of factors ensured this support. These included a general revulsion to war and a realisation of the true horrors of modern warfare, and a fear of what a future war would be like, especially the fear of an aerial bombardment of civilians. There was a desperate need for peace and reconstruction and the extension of the suffrage in 1918 led many to believe that universal peace would become a real possibility now that women and working men could vote. This was coupled with a belief that public opinion could be used to influence the policy makers. Finally, the creation of a League of Nations in 1919 to settle disputes between nations through arbitration rather than warfare appeared to lead away from the old methods of secret diplomacy prevalent in the years before 1914 and which was believed to have been one of the major factors which led to war. (1) The emergence of this new international structure encouraged women to claim a specific ‘feminist ‘ role within the organisation based on the distinct perspective women would bring to such a forum.

Peace as a women’s issue

The experience gained in women’s organisations before the war provided a firm foundation on which to build the women’s peace movement of the post-war years. In the century before the war women had gradually increased their involvement in political matters by working in various organisations like the anti-slavery and peace movements and the campaign for women’s suffrage. They developed a means of campaigning which challenged the existing ‘separate sphere’ ideology without threatening it. (2) They enabled this transition by emphasising women’s special qualities, in particular their maternal nature. (3)

At first women met in their own homes, through sewing circles and parlour meetings where they discussed peace and slavery and produced tracts and pamphlets outlining their views. Gradually, their campaigns moved outside the home through canvassing house-to-house on various petitions and finally to public meetings and demonstrations. Women began to form their own groups in the 19th century: the Women’s Peace Society in 1874, the Women’s Co-operative Guild in 1883 and the National Union of Women’s Suffrage Societies in 1897. It was important for women not to openly challenge male dominance in the political world but by emphasising women’s specific feminine qualities it was possible to make an entrance to the political arena and bring influence to bear on the decision makers. Peace was seen as a woman’s issue, particularly because there was an accepted natural pairing of male/war and women/peace. After seeing the horrors of the Boer War, Olive Schreiner linked this pairing to a natural abhorrence of war because of women’s child-bearing role in society:

‘Our relation to war is far more intimate, personal, and indissoluble…Men have made boomerangs, bows, swords or guns with which to destroy one another; we have made the men who destroyed and were destroyed! There is no battlefield on earth, nor ever has been, howsoever covered with slain, which it has not cost the women of the earth more in actual bloodshed and anguish to supply, than it cost the men who lie there.’ (4) 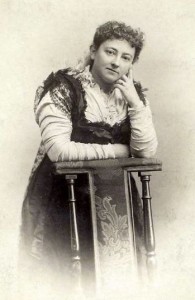 There was a desperate need for peace and reconstruction and the extension of the suffrage in 1918 led many to believe that universal peace would become a real possibility now that women and working men could vote.

This emphasis on women’s natural maternal and life-preserving role in society characterised the thinking of many of the women involved in the post-war peace movement. The women who campaigned for peace employed numerous methods to keep peace at the forefront of public opinion and at the top of the political agenda. They claimed equal rights to a political voice and yet emphasised their difference to men. They believed that women as women had a distinct contribution to make to what had previously been a male-dominated sphere. They believed that through organising public opinion in support of the cause of peace they had the potential to influence government policy and diplomacy in the post-war world. One such way was through the No More War demonstrations.

Women’s involvement in the No More War demonstrations

In 1921 the No More War movement was founded. It was a pacifist organisation but drew support from all groups working for peace including the League of Nations Union in England. An international dimension was added through alliance with the International Women’s Co-operative Guild and the International Women’s Suffrage Alliance. The movement organised demonstrations as a means of focusing the minds of politicians on peace and showing public support for the League of Nations and disarmament. Demonstrations were held simultaneously locally, nationally and internationally and women played a prominent part, as evidenced in the local newspapers and women’s magazines at the time. (5) 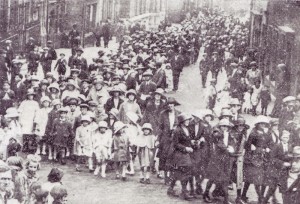 The No More War demonstration held in Lancaster in 1922: The procession through Lancaster. Lancaster Guardian, 1923.

The demonstrations took place on a Saturday or Sunday and took the form of processions through the town, converging on a public area where platforms were erected and where speakers took the stand. The procession was seen as a peaceful means of protest used previously in the suffrage campaign and one in which women could take part outside the home. The children who constituted the procession often represented their Sunday schools. They rode on decorated floats or walked along a given route, usually dressed in white, their traditional church procession outfits and the colour of peace and purity. Banners were also a visible means of identifying the groups taking part but, most importantly, they were designed to catch the eye and convey a message at a glance. In England Morris dancers and bands played in the processions and pageants and tableaux took place in designated areas, encouraging many of the local community to come along. 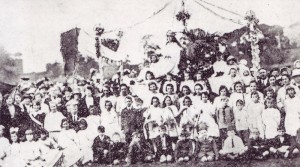 In 1921 demonstrations were held simultaneously in Paris, Berlin, London and Rome.

Maude Royden and Helena Swanwick, two veterans of the 1912 Suffrage Pilgrimage, spoke at the London demonstration, urging women to take on a role in post-war politics and support the League of Nations. Whilst in 1922, Rev. Studdert Kennedy, one of the first radio personalities, known as Woodbine Willie, advocated ‘organised opinion’ as the best method of urging peace policies on democratic governments.

The Northwest towns taking part were Nelson, Carlisle, Cockermouth, Cleator Moor, Egremont, Whitehaven, Blackburn, Bolton, Manchester, Stockport, Oldham, Warrington, Kendal and Lancaster. The diversity of the compositions of the populations of these towns reflects the broad base of support that the No More War Movement commanded. In Kendal local Sunday schools worked with other churches to organise the procession which was a quarter of a mile long and was attended by the local mayor and witnessed by a large crowd. (6) 2000 people joined the demonstration in Blackburn in 1923 and were addressed by Lola Toerschky, a young German woman visiting the town. She spoke of the simultaneous demonstration in Berlin: ‘a united demonstration of people holding every political shade of opinion and all religions and no religion, drawn together by a singleness of purpose.’ (8) That purpose being the cause of peace.

Our relation to war is far more intimate, personal, and indissoluble... Men have made boomerangs, bows, swords or guns with which to destroy one another; we have made the men who destroyed and were destroyed!

The Lancaster No More War demonstration, 1922

Whilst at the demonstration held in Lancaster in 1922, Mrs Muriel Dowbiggin, Secretary of the League of Nations Union and former suffragist, appealed directly ‘to women for sympathy and support…. to compel Parliament and the Cabinet to support the League of Nations.’ (7) The following year the local paper published photographs of the demonstration, showing a large number of women and children in the procession. The Lancaster event took place over the whole weekend with tableaux, Morris dancing, bands on the Saturday and the procession through the town on Sunday. The demonstrators marched through the centre of the town to the local football ground where three platforms were erected for the speakers, one of whom was Selina Cooper, the suffragist and labour organiser from Nelson, along with Mrs Wallhead-Nicholl, daughter of Richard Wallhead, Chairman of the Independent Labour Party at this time, who later became Labour MP for Bradford in 1945.

By 1923 over 200 demonstrations had taken place in Britain. (9) Through the No More War demonstrations of the 1920s women continued to work from their specifically female and feminist organisational base and their political consciousness. They remained in the public sphere, albeit working alongside mixed or male-dominated groups for peace. The guiding principle of ‘equal but different’ appealed on grounds of gender and class and as such remained a central plank in the ideological framework of women peace activists. The gender dimension of the campaign for peace was reinforced by the emphasis on maternalism and life preservation, which formed a continuous theme in the rhetoric of the time and in the banners carried by the women in the processions. Those involved were driven by a belief that they, as women, had a distinct contribution to make to international affairs in the post-war world.

The Lancaster event took place over the whole weekend with tableaux, Morris dancing, bands on the Saturday and the procession through the town on Sunday.