Muriel Dowbiggin left her mark on Lancaster’s civic life through her long service as a City Councillor and Mayor and as a peace activist and campaigner for women’s rights. She also left a strong impression on her younger friend, Dorothy Simpson, whose memories are shared here. 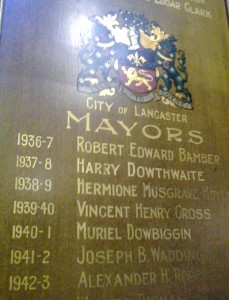 The prioritisation of men’s achievements in the historical record can make it difficult to trace in any detail the activities of the many women who became increasingly involved in public affairs and activism in the early years of the twentieth century. As war approached in 1914, many women who had worked for labour rights and universal suffrage in the early years of the twentieth century turned their attention to other forms of activism, including campaigning for peace, and in 1916 – after the appalling casualty rates of the early years of the war – against conscription. At the end of the war, peace activities continued locally, nationally and internationally, through the No More War movement, the peace marches, the League of Nations and other organisations. Although universal suffrage still lay ten years ahead (1928), it became possible for women to stand for election to local City Councils; some of those elected gave loyal unstinting service in the interwar years and during and after World War 2.

Muriel Taylor (b. 1893) in 1923 married Ernest Dowbiggin, an analytical chemist and Director at Storey’s Lancaster linoleum company, settling in a bungalow at Caton Green, just north of Lancaster. The couple had no children, leaving Muriel free to pursue her political activities, both as a campaigner for peace and women’s suffrage, and as a Lancaster City Councillor from about 1925 and third woman Mayor of Lancaster, 1940-41. She was also a member of the local Women’s Liberal Association and the Women Citizens Association. (1) Muriel was a Quaker and may well have been on the Northern Friends Peace Board (founded in 1913), which is still active in Lancaster today.

Muriel was the kind of woman of whom they say, ‘If you want something done, ask a busy woman.’

The recent oral memories of Dorothy Simpson, who knew Muriel from the late 1940s, give us a sense of Muriel:

“My father-in-law was a contemporary of Muriel’s on the City Council… My husband and I moved in three doors up from the Dowbiggins when we married. We would go round for supper, where the talk was mostly of Council business… [My husband] Eric thought a lot of her. Muriel was a very strong-minded woman – her husband was a meek, mild man… [Although] I stood in awe of her sometimes, when I was newly-married I would go to her for advice… Muriel was the kind of woman of whom they say, ‘If you want something done, ask a busy woman.’ ”(2)

After the Paris Peace Conference which ended ‘The Great War’, the League of Nations (LN) was founded on 10th January, 1920. Its purpose was envisaged as an international intergovernmental organisation, headquartered in Geneva, Switzerland, to provide a forum for resolving international disputes – the first international organisation whose principal mission was to maintain world peace. When the LN’s hopes of world peace foundered at the outbreak of World War 2, it was replaced by the United Nations (UN) on 20th April 1946, which inherited some of the LN’s agencies and organisations. (3)

Muriel Dowbiggin’s social position and connexions made her typical of local League of Nations Union (LNU) organisers at the time.

The League of Nations flag

Muriel Dowbiggin’s social position and connexions made her typical of local League of Nations Union (LNU) organisers at the time:

‘In Lancaster, Councillor Muriel Dowbiggin ran the LNU with help from her husband, alongside organising Poppy Day, serving as [a] Governor of the girls’ grammar school and sitting on the committee of a local Women’s Institute… LNU activists were rarely agitators for the League alone; they tended to be individuals highly active in multiple spheres.’ (4)

Muriel continued to be involved in peace activism throughout the 1920s. In 1922 she spoke at the Lancaster No More War demonstration and in 1926 she organised the Lancaster Peacemakers’ Pilgrimage, in conjunction with the Society of Friends. (5) The Peacemakers’ Pilgrimage was a ‘nationwide procession which resulted in 10,000 people converging on Hyde Park in London on Sunday 20th June 1926.’ (6) It was organised principally by the Women’s International League in conjunction with other organisations such as the Women’s Co-operative Guild, and was based on the 1913 Suffrage Pilgrimage, involving 11 routes from all corners of England. As was typical of the Pilgrimage, various local meetings were organised alongside the Lancaster procession to enable women who couldn’t make the journey to London to take part. On the evening of Saturday 30th May, a public meeting was held in Lancaster, which Muriel attended. Another was held in Caton, which brought together the Friends of Peace from Lancaster with those from Bentham, North Yorkshire. Miss Lucy Cox, the General Secretary of the No More War movement came from London to address the meeting, alongside Miss Ford, a Quaker and leading peace activist from Bentham. The Lancaster Guardian reported that on the morning of Sunday 1st June 1926, 150 people gathered at Lancaster Town Hall to join the Peacemakers’ Pilgrimage to the Parish Church. The Pilgrimage then continued on to Preston, where over 500 people joined it on the journey to London.

Muriel Dowbiggin, who died on the 6th March, 1963 at Caton Green, is still remembered by Lancastrians who knew her.

The Lancaster Guardian reported that on the morning of Sunday 1st June 1926, 150 people gathered at Lancaster Town Hall to join the Peacemakers’ Pilgrimage to the Parish Church.