Margaret Fell and Elizabeth Fry are two significant female figures in Quaker history and both passed through Lancaster Castle: Fell was tried and imprisoned here as a religious dissident in the 1660s while Fry visited the Castle some 150 years later during her national tour inspecting prison conditions. In this article, Zephyrine Barbarachild, herself a Quaker and member of the Independent Prison Monitoring Board, discusses the important contribution these two women made with regard to prison reform in this country. Zephyrine explains how, whether it was from inside or from outside Lancaster Gaol, both these women led the way in speaking up for decent conditions for all prisoners. 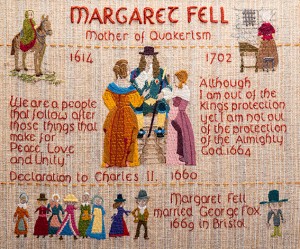 QUAKER TAPESTRY – MARGARET FELL: Quaker Tapestry © This image is one of the 77 illustrations known as the Quaker Tapestry which is a community textile of embroidered panels made by 4,000 people from 15 countries. The exhibition of life, revolutions and remarkable people can be seen at the Quaker Tapestry Museum in the Quaker Meeting House in Kendal, Cumbria UK www.quaker-tapestry.co.uk

Lancaster Castle’s dual role as court and prison at the geographical centre of England, Scotland, Wales and Ireland has made the Castle a physical representation of the power of governments and monarchs from the Middle Ages to the present day. Until it closed in 2011, HMP Lancaster Castle was the oldest functioning prison in Britain. Many people were tried, and some executed, in Lancaster, including protestors from the many popular public movements which have challenged the power of the State. Amongst them were the founders of Quakerism, Margaret Fell and George Fox, held for refusing to accept the superiority of the King, and as a result of their confinement they became early proponents of the concept of humane prison conditions.

The Religious Society of Friends (commonly known as Quakers) began to grow significantly around 1652, when the “founder” George Fox (1624 – 91) visited the Northwest of England. We have Joseph Besse’s Sufferings of the Quakers, a vivid account from 1753 of the early imprisonments of many Quakers in Lancaster Castle, which then served both as the county assizes and the gaol. Bessenoted that in 1660 many Lancashire Quakers – including George Fox, and some women – were variously imprisoned for meeting illegally to worship, and for refusing to swear the oath of allegiance:

‘So at about the End of this Year [1660], two Hundred and seventy [Quakers] were Prisoners together at Lancaster, mostly for refusing to take the Oaths… [and] their constant and publick Manner of assembling for Worship’. (Besse, 1753: pp.306-9)

Among the six thousand Quakers imprisoned during the 1660 was the prominent early Quaker Margaret Fell (1614 – 1702), who later married Fox in 1669, and became known as The Mother of Quakerism. She was arrested in 1664 for failing to take an oath (swearing allegiance to the King) and for holding Quaker Meetings in her home, Swarthmoor Hall. She defended herself, saying that ‘while it pleaseth the Lord to let me have an House, I would endeavour to worship him in it’ (Besse, 1753: p.312).

‘while it pleaseth the Lord to let me have an House, I would endeavour to worship him in it’

After six months in Lancaster Gaol, Fell was sentenced to life imprisonment and forfeiture of her property. She remained in prison from 1664 – 1668, though was occasionally released, and imprisoned again in 1670.

When Margaret Fell again appeared before the Judge in 1664, she fearlessly raised the matter of Lancaster Gaol’s appalling prison conditions:

‘Judge: Mrs Fell, you wrote to me concerning the Badness of your Prisons, that it rains in, and that they are not fit for People to lie in.

Margaret Fell: The Sheriff knows, and has been told of it several Times, and now it is raining, if you will send, you may see whether they be fit for People to lie in or not .… If you were to be in it yourselves, you would think it hard, but your Mind is only in Cruelty to commit others… and put them into a cold Room, where there was nothing but bare Boards to lie on, where they have lain several Nights, some of them above threescore Years of Age… and when William Kirby [officiating on the Bench] was asked, Why might they not have Liberty to shift for themselves for Beds?  He answered, They were to commit them to Prison, but not to provide Prisons for them. And being asked, Who should do it then? He answered, The King.

In 1668 Margaret Fell was finally released from gaol, from where she had remained active in promoting the Quaker cause, including publishing a 1666 pamphlet called Women’s Speaking Justified which reasoned that women have as much right to speak out in public as do men. She continued her Quaker work until her death in 1702.

The Quaker prison reformer Elizabeth Fry (1780 – 1845) – for some time celebrated on the £5 note – may well have been familiar with Margaret Fell’s account of her time in Lancaster Gaol. The established Quaker tradition of prison reform and prison ‘visiting’ at Lancaster Castle resumed when Fry visited Lancaster Castle prison with her brother Joseph Gurney on 20th September, 1818 on a planned tour of prison visits in the North of England, accompanied by local magistrates and Quakers. Joseph Gurney published a comprehensive report of their findings in January 1819, Notes on a Visit Made to Some of the Prisons in Scotland and the North of England in Company with Elizabeth Fry: With Some General Observations on the Subject of Prison Discipline.

It must be in the spirit, not of judgment, but of mercy. She must not say in her heart I am more holy than thou, but must rather keep in perpetual remembrance that 'all have sinned and come short of the Glory of God'

The visit took place after extensive reform of the gaol and shortly before the inception of a separate women’s prison. In contrast with the appalling conditions experienced by Margaret Fell 160 years earlier, prison conditions were reported as good, compared with those of many other prisons Fry visited, and the report particularly emphasises the importance of rehabilitation.

Born into the well-to-do Quaker Gurney family in Norwich, Elizabeth Fry devoted herself from early adulthood to work for prison reform, writing in 1827:

‘Much depends on the spirit in which the visitor enters upon her work. It must be in the spirit, not of judgment, but of mercy. She must not say in her heart I am more holy than thou, but must rather keep in perpetual remembrance that ‘all have sinned and come short of the Glory of God’.’ (Quaker Faith and Practice, 2005: 23:98)

According to the Memoir of Elizabeth Fry, published in 1847 by two of her daughters, Katherine Fry and Rachel Cresswell, Fry ‘encountered in the prisons every grade and variety of crime… [but she believed that]… a crying need existed for influence, for instruction, reproof and encouragement’ (cited in Quaker Faith and Practice, 2005: 18.08).

…This prison is kept in a condition of remarkable cleanliness; the sleeping-cells are well-aired, the bedding is good, and no pains are spared to secure the health of those, who are confined here. 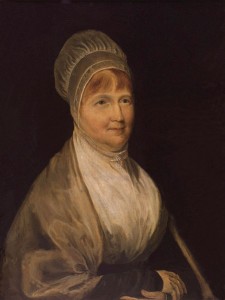 A detailed record survives of Fry and Gurney’s visit to Lancaster Prison in Gurney’s 1819 book. An excerpt from the Preface states the general aims of the visit:

‘The principal object of our journey was connected with the concerns of our own religious Society, that of Friends; but we also made a point of inspecting the prisons in the several towns, through which we passed… and it is evidently a matter of importance, that the Public should be made acquainted with the real condition of these places of confinement. The better the actual state of our prisons is known and understood, the more clearly will all men see the necessity of those arrangements, by which they may be rendered schools of industry and virtue…  by those jails on the one hand, which are conducted on bad principles, crime and misery are produced and multiplied: and on the other hand, that prisons, in which the prisoners are classified, inspected, instructed, and employed, have a powerful tendency to that, by which crime and misery will certainly be lessened, vis. the reformation of criminals…

I am not sanguine enough to suppose that any remarks of mine will have much effect in forming the views of others; but if they should be the means of inducing any persons, and more especially those in authority, to give to this important subject the consideration, which they have not yet given to it, I shall be satisfied in the belief that my efforts, however feeble, have not been entirely fruitless. In the course of my work, it has been my particular endeavour to represent and embody the sentiments entertained by my sister Elizabeth Fry, whose experience with respect to prisons is much greater than my own’. (Gurney, 1819: p.x)

The book later describes the visit to Lancaster:

…This prison is kept in a condition of remarkable cleanliness; the sleeping-cells are well-aired, the bedding is good, and no pains are spared to secure the health of those, who are confined here. It was intended that one only should sleep in each cell; but the number of prisoners, who are now crowded into the jail, renders this excellent arrangement wholly impossible. Their food is bread, gruel, and potatoes. Those who behave well have also a weekly mess of broth with beef in it. They are all well clothed, and the tried prisoners are distinguished from the untried, by dresses of a different colour….

We saw not a chain in the prison. Fetters are never used in it, except for the refractory, and in extreme cases. There is in this prison an excellent infirmary, regularly attended; also a convenient chapel, in which service is performed four times weekly, and in which the audience is properly classed, the women being separated from the men by a screen across the room. The chaplains have under their care a library of religious books for the use of the prisoners. No means appear at present to be adopted for the instruction of those amongst them, who are unable to read. No escape has taken place from this prison for many years; but this is owing rather to the kindness as well as vigilance of the governor, than to the security of the building…

It appears by a statement received from Thomas Higgin, the governor, that, of those prisoners who pass their time in idleness, a much greater proportion come back again after being discharged, than of those who are employed… The employment of all the prisoners in this jail is, indeed, an object greatly to be desired’. (Gurney, 1819: pp.62-5)

From the late 1800s until its recent closure, a statutory Board of Visitors (known since 2003 as The Independent Monitoring Boards) regularly visited HMP Lancaster Castle to monitor detainees’ conditions in considerable detail, reporting annually to the community and to the Prisons Minister. Quaker Chaplains continue to work in many prisons in England and Wales, furthering the work of early Quakers like Margaret Fell and Elizabeth Fry.